Renowned sports journalist and author, Ehsan Qureshi, met with a horrible road accident on April 7 but fortunately he didn’t receive any serious injury. The car he was driving, however, was badly damaged. 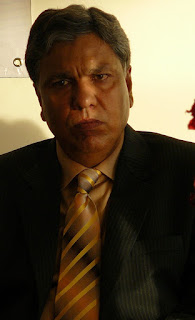 Ehsan Qureshi, the Senior Sports Reporter of the Associated Press of Pakistan (APP), the premier news agency of the country, was driving towards the Civic Centre, Gulshan-e-Iqbal, on University Road at around 11.45 am when he ran into a coaster that had stopped abruptly at the edge of the pedestrian crossing near the PIA Planetarium.

“What I could remember is that the vehicle in front of me applied emergency brakes when the police signaled its driver to stop to facilitate people cross the road. Driving at around 40 to 45 km/hr I was not very far behind that coaster. The distance was so little that my car banged into it although I had also put my feet on the brakes right away,” he recalled.

“The intensity of collision was so ferocious and I lost my senses momentarily. I did hear faint voice of people who had gathered around me but I was unsure what exactly was happening. It felt for a while that my neck had been broken. The scores of people who rushed to the scene also feared serious injury after watching the condition of my Suzuki Alto car,” he added.

“Thankfully, with the prayers of my family, friends and well-wishers, I survived. It was indeed a major road accident, as the car had to be towed away, but thanks God I didn’t suffer any injury,” a mighty relieved Ehsan Qureshi said.

“I was touched by the caring attitude of the area people who demonstrated great human qualities to rescue me. We often complain of materialism and selfishness in society but the incident showed once again that the humanity is still alive. I will never forget the timely support of the people present on the scene who were instrumental in lifting my spirits and helping me stand on my feet quickly. Hats off to them, my unknown friends who stood by me there on the roadside,” he remarked.

“I am particularly grateful to my friends Prof Ejaz Ahmed Farooqui and Jamil Ahmed who promptly reached the spot of the accident and helped me recover,” Ehsan Qureshi stated.

Ehsan Qureshi displayed great courage and fortitude from the moment he was away from the scene. The first thing he enquired after depositing his car to his mechanic in PECHS was if the luncheon media briefing of Dr Mohammad Ali Shah, Sindh Minister for Sports, at the Karachi Gymkhana, was starting on time. He was not prepared to return home. Rather he wanted to spend the rest of the day as was originally planned.

He, however, agreed to relax for about half an hour at the office of Jumbo Infomedia before moving on. He didn’t sit for a moment longer and hired a cab to proceed to the head office of New Jubilee Insurance where he had an appointment with its Managing Director, Tahir Ahmed. 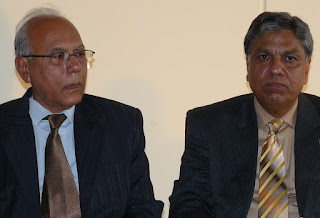 The HBL sports department was his next destination where he had his meal with old-time cricketer friends Abdul Raquib and Liaquat Ali, while recounting the tale of horror a few hours ago.

Phones from the concerned friends and family members kept on coming but he performed his duties normally at the APP office on I I Chundrigar Road, filing a good number of stories. He was not finished yet. He then reached the Karachi Golf Club to cover the bridge tournament and it was not until 10 pm when his mentor and senior office, Abdul Qadir Qureshi, finally dropped him at his residence on Rashid Minhas Road.