The Pakistan Day International Bridge Tournament 2014, to be held at Hotel Pearl Continental, Karachi, from March 21 to 23, will be having greater foreign participation than was being anticipated. 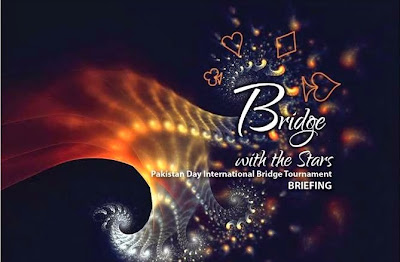 The organizers have already received confirmation from players from as many as 11 countries including Turkey, Canada, Australia, Egypt, Norway, Jordan, China, India, England and the United Arab Emirates (UAE) for the first international bridge tournament to be staged in Pakistan in 17 years.

Khurshid Hadi, President, Mind Sports Association of Pakistan (MSAP), who was the chief organizer of the Pakistan Golden Jubilee Championship 1997, is in the forefront again, mobilizing his resources to do it once more. This time he has been blessed with a better organizational team which seems to be having the capacity to deliver.

The Pakistan Day International Bridge Tournament 2014 is a joint venture of the MSAP and the Pakistan Bridge Federation (PBF), which is currently headed by Nawab Yousuf Talpur, with Gulzar Bilal being the Secretary.

Pizza Hut, Tapal Tea, Inbox Technologies and J S Bank are the sponsors of the three-day event with Geo Super being the exclusive media partner.

The organizing committee held a session with the sponsors at the venue of the tournament, on February 20. A media briefing in this regard had already been organized more than a week ago.

Khurshid Hadi, in his welcome address, recognized the sponsors for joining hands with them in promoting the event, aimed at boosting the soft image of the country.

“Let’s not forget that the conditions are far from ideal and we do need momentous efforts to bring about a change collectively. The Pakistan Day International Bridge Tournament 2014 could help immensely in changing the perception and earning goodwill for the country, besides reviving the mind sport,” he remarked.

“Let me put on record the efforts of Pakistan’s legendary bridge player, Zia Mahmood, in playing his role in roping in the overseas players, although he himself won’t be in a position to come over due to his preoccupations there,” Khurshid Hadi added.

Tahir Masood, Chairman, Organizing Committee, didn’t mince words in stating that he was pleasantly surprised by the overwhelming response they have been received from the foreign players.

Ahsan Zahir Rizvi, President, Karachi Bridge Association (KBA), was of the opinion that the upcoming international event will help greatly in motivating the youngsters to take to bridge.

Aqeel Hasan, Managing Director, MCR (Pvt) Ltd, stated that Pizza Hut was proud to be associated with the international bridge tournament as Pakistan needed such kind of high-profile events at regular intervals.

Ghias Khan, CEO, Inbox Technologies, while soliciting support for the junior prpgrammes of bridge, urged the MSAP and the Pakistan Bridge Federation (PBF) to lay emphasis on the youth circuit.

Tariq Rasheed Khan, Director, MSAP, and a former President of the PBF, informed about the initiatives taken in the recent past to promote mind sports from the grassroots level. He particularly talked about the landmark inclusion of bridge as a proper subject in one of the leading schools of the city.