The 16th National Seniors Cricket Cup 2014, being organized by the Pakistan Veterans Cricket Association (PVCA), will be getting underway with the inaugural match of the Southern Zone between Karachi Gold Bridge and Karachi Friends at the National Stadium, Karachi, on March 30. 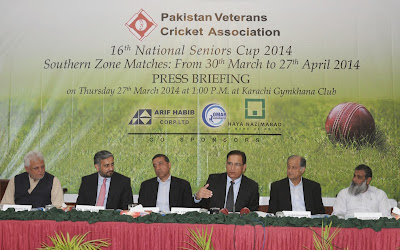 The details of the seven-week event, being sponsored by Arif Habib Corporation Limited and Omar Associates (Pvt) Limited, were unveiled by Fawad Ijaz Khan, Chairman, PVCA, and Aashiq Hussain Qureshi, CEO, PVCA, in a media briefing at the Karachi Gymkhana on March 27.

It was disclosed that a total of 108 teams from 58 cities will be participating in the tournament and they have been divided in 24 Groups. As many as 35 city teams from Punjab, 13 from Khyber Pakhtunkhwa, eight from Sindh, three from Islamabad and one from FATA have entered the competition whose national final will be played between the winning teams of North and South zones at Lahore on May 4.

The PVCA, it may be recalled, was established in 1998 at Karachi, having been registered with the Securities and Exchange Commission of Pakistan (SECP) since 2001 as the sole representative cricket organization for seniors/veterans cricket in the country.

The PVCA has attained not only national but international recognition as well. It has played three series of one-dayers against Indian Veterans with some of the legendary cricketers having played in those games. Besides organizing seniors/veterans/super veterans cricket, the PVCA is also actively promoting school cricket.