Birthday boy Siddle sizzles with a hat-trick to kickstart Ashes

Normally I don’t like to comment during the course of a Test match but the spectacular feat of Peter Siddle on the opening day of the first Ashes Test at the Gabba in Brisbane on November 25 has prompted me to do a piece without waiting for the game to finish.

Obviously it’s not the first-ever hat-trick to be achieved in a cricket field or in the international arena but it’s quite unique in more than one way. Siddle must have received numerous messages and greetings before the start of the Test match not only because he was returning to the national team after nearly a year but also because it was getting underway on his 26th birthday.
The Australian selectors had taken a calculated risk by inducting him in the playing eleven at the expense of Doug Bollinger who had been the country’s leading wicket-taker of the year in Test matches.

Siddle did not waste any time in returning the compliments. He celebrated the recall as well as the birthday with a hat-trick and career-best figures. He produced a couple of amazing spells to devastate the England batting line-up.

It was a wonderful exhibition of aggressive fast bowling and he richly deserved the hat-trick, which was first by an Australian since Glenn McGrath did it in 2000-01.
The magical moments came in his 12th over as he brought the crowd at the Gabba to life by dismissing Aliastar Cook, Matt Prior and Stuart Broad on the third, fourth and fifth balls respectively to complete a magnificent hat-trick.
Cook, who was hanging there in the middle since the start of the innings, was plucked by Shane Watson at first slip while the next one whistled between Prior's bat and pad. Broad was undone by a toe-crushing yorker that caught him plumb in front.

There was a little of drama and the celebrations had to be halted briefly as the Broad challenged the verdict of umpire Aleem Dar. The action replays confirmed that the on-field umpire had indeed made the correct decision.
"I'd like to say it was the plan but I was looking to hit the top of off. To get him on the full with a bit of shape was a dream ball. I'll definitely remember it for a long time. To see the finger go up quickly was very pleasing," Siddle was quoted as saying. 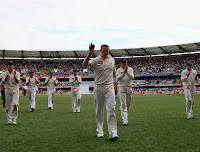 "Then all the boys came charging in and Stuart was still in, so I sort of thought he'd call for the review. When you hit them on the full you're pretty confident," the charged up speed merchant stated.

"I don't want to be mean to parents and friends who have given me presents over all the years, but this is definitely going to be one of the best birthday presents that I'm ever going to get. It's an amazing feeling," Siddle added.
His six-wicket haul on the opening day of the first Test has provided Australia the best possible start in their pursuit for regaining the Ashes. Skipper Ricky Ponting could not have desired a better performance from his returning spearhead.
readmore »»

Although Pakistan could only draw the Test series, after having narrowly lost the ODI series, against South Africa, manager Intikhab Alam very rightly described the just concluded tour of the United Arab Emirates (UAE) as a success story for his team.

“I think Misbah-ul-Haq led the team from the front. The boys showed fierce determination to perform under intense pressure which augurs well for the future,” he told APP Sports Correspondent, Ehsan Qureshi, in an interview ahead of their departure to Lahore on November 25.

“It was very heartening that the Pakistan team put up a fighting show against formidable South African placed second in the ICC Test ranking. Overall it was an impressive show by our boys,” he commented.

“Coming from behind and drawing both the Test matches in Dubai and Abu Dhabi was creditable performance. It was an outstanding show under intense pressure,” he reckoned. 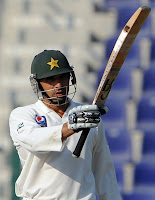 Pakistan surprised even their own supporters by having managed to draw both the Test matches after nightmarish starts. The fancied South Africans were unable to either of the two games despite being the firm favourites.

“The fighting performance against South Africa in ODIs and Test matches are great boost for the team ahead of their tour to New Zealand,” former Pakistan Captain Intikhab Alam, who replaced Yawar Saeed as Manager, observed.

He said it was good performance by the team in absence suspended pace duo of Muhammad Aamir and Muhammad Asif and opener Salman Butt.

“Team members showed responsibility and good conduct on and off the field. Misbah led the side well and also proved himself with the bat,” Intikhab added.

He said there was lot of talk criticism on the appointment of Misbah as the captain of the Test team but he fully proved himself worthy of the position.

“The atmosphere in the dressing room remained friendly and congenial and coach Waqar Younis alongwith the support staff played their role admirably,” he said.

Commenting on the pitches prepared for Test matches, tracks in Dubai and Abu Dhabi were more suited for batting but added there was some good performances by Pakistani and South African bowlers on those pitches.

“I think ODI as well as Test series were interesting and absorbing and there was great tussle between the bat and the ball throughout the tour,” he remarked.

Commenting on the areas of concern for his team, he did not mince words in stating that fielding and top level fitness needed to be focussed ahead of the upcoming tour of New Zealand.

To a question about wicketkeeper Zulqarnain Haider deserting the team on the morning of the fifth ODI in Dubai, he said that he had prepared a report and will be submitting to Pakistan Cricket Board (PCB) Chairman, Ijaz Butt, shortly.
readmore »»