The Jubilee General Insurance as well as the Jubilee Life Insurance have expressed the desire to take snooker to higher level and they would continue supporting cue sports in Pakistan in future as well. 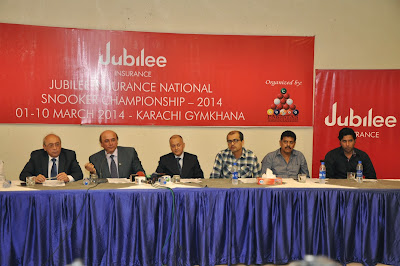 The assurance in this regard was given by none other than the sports-loving Tahir Ahmed, Managing Director, Jubilee General Insurance, during the media briefing held to launch the Jubilee Insurance 39th National Snooker Championship 2014 at the Karachi Gymkhana on February 28.

The 10-day event will start off at the Gymkhana’s Snooker Hall on March 1.

“My colleague Javed Ahmed, Managing Director, Jubilee Life Insurance, is also on board and it’s our joint strategy to play our due role in the progress and advancement of snooker in Pakistan. We have been doing it for the last few years and we will continue doing so in the future as well,” he remarked.

“It’s heartening to note that snooker has become a very popular sport now which is followed in nearly every home of our country. The emergence of high quality cueists augurs very well for the future of the game,” Tahir Ahmed observed while pointing towards Mohammad Asif, the 2012 world champion, who was also sitting on the stage.

The President of the Pakistan Billiards & Snooker Association (PBSA), Alamgir Shaikh, acknowledged the massive sponsorship support offered by the twin Jubilee Insurance companies over the years.

“They have played the most significant role in taking snooker to the present level where we are able to extract positive results. Sponsoring three national ranking tournaments every year in these times is quite an accomplishment. They have been doing it for the past seven years and their reassurance is very well taken,” the PBSA chief observed.

Ali Rahim, President, Karachi Gymkhana, and Mohammad Ali, Business Unit Head, Geo Super, also spoke on the occasion and both of them pledged to continue contributing for the cause of snooker.
readmore »»