Posted by Editor at 1:33 PM .
0 comments
Labels: Micromax Cup 2010, Virender Sehwag
By Syed Khalid Mahmood
Virender Sehwag, the most explosive of all present day opening batsmen, was deprived of an ODI hundred in controversial circumstances and he had to contend with an unbeaten 99 instead as he guided India to a much needed victory over Sri Lanka at Dambulla in the ongoing Tri-nation series for the Micromax Cup 2010, also featuring New Zealand. 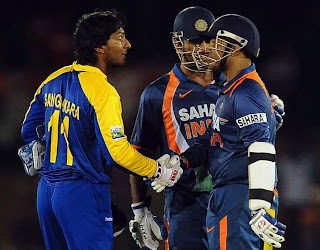 Although he made 99 off just 101 balls the innings looked a bit out of character from the blade of a man who doesn’t normally allow the bowlers to settle down. It was one of those days when he was in a mood to bat with a calculated approach fully realizing the gravity of the situation.
His partnership with skipper Mahendra Singh Dhoni had taken India out of danger in the must-win game, after yet another horrible top-order collapse, and he took the charge when the target had come well within the reach.
Sehwag’s belated onslaught opened the window for another century from the belligerent opener besides earning the vital bonus point for the team. Once in full try no bowler in the world can contain him and he was in complete control once more while assaulting the Sri Lankans.
Dhoni, not surprisingly, was also very keen to let his partner reach the landmark and it was just a matter of one more run for Sehwag with India still needing five for victory when off-spinner Suraj Randhiv began in what was certain to be the last over of the game.
Sehwag was not happy when four byes were conceded at the start of the over but he still had a chance to do it. After failing to pierce the field on the next couple of deliveries he took the aerial route and cleared the fence.
But that was a no-ball which meant that India had actually completed the win without the last stroke from Sehwag. Although it was a six but he was credited with nothing, as per laws, leaving him stranded on 99.
Randiv had overstepped by at least a foot when the scores were level to leave causing some resentment in the Indian camp. Sehwag, during the post-match presentation ceremony, couldn’t hide his emotions and he charged that the tall off-spinner had deliberately no-balled to deny him a hundred.
Sehwag, however, was happy that India collected the win and bonus point irrespective of the fact that he completed his century or not. 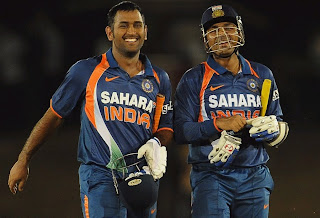 "The ball was doing something in first 10 overs so I batted cautiously and tried to build partnerships, and after that I played my shots. I was not worried about runs, I knew if I batted 30-40 overs, then match will get over in 40 overs, I just tried to not play the rash shot," he explained why he took so much time to open his shoulders.
"We discussed in the meeting that someone has to play 30-40 overs, especially someone from the top order. I was just trying to play as long as I can, I was just waiting for some loose deliveries to hit for four," he added.

Dhoni very rightly was full of praise for Sehwag for having taken the responsibility once more when the chips were down.
readmore »»