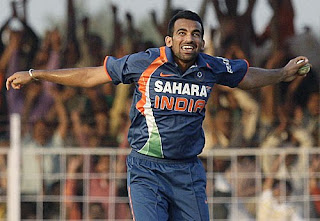 The Indians came perilously close to conceding the first One-day International of their five-match series at the Madhavrao Scindia Cricket Ground in Rajkot on December 15 even after having posted their highest-ever ODI total.

The relief on the face of skipper Mahendra Singh Dhoni was obvious when he had come out to have a few words with Ravi Shastri who was conducting the presentation ceremony at the ground.

While recognizing the great spells from left-arm bowlers Zaheer Khan and Ashish Nehra, that saved the day for India, Dhoni minced no words in stating that it wasn’t the greatest day in the field where they very nearly lost the match while defending a massive total.

You didn’t need to be an expert to assess the situation. It was Indian’s pathetic fielding that let them down and all but undid the great work of their batsmen. They would have brought the schoolboys to shame such horrible was their display in the field.

Although the Captain Cool had not spoken about the lapses in the field that day but he has come out in the open as his team prepares for the second game in Nagpur on December 18.

Dhoni has expressed concerns at the fielding and he has every reason to feel worried from the performance of his teammates who were guilty of dropping three sitters at Rajkot after having spilled a dozen or so catches in the Twenty20 Internationals besides making mess of numerous run-out opportunities.

"We were fielding well in patches and not dropping catches at the international level. You may drop the odd difficult catch but straightforward chances need to be taken. In the last three-four games we have dropped a lot of regulation catches. Of course it bothers me,” Dhoni admitted.

"At the same time it will be solved at some point because of the effort that we are putting in. We are hoping we don't drop catches in this game," he observed.

Dhoni was not shorts of words in praising the brilliant bowling at the death by the duo of Zaheer and Nehra that saved India’s blushes at Rajkot. 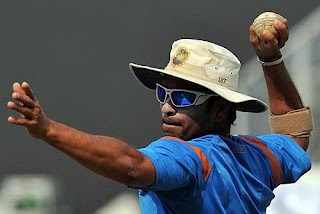 "It was one of the best in the past year. I have always said we had not been very consistent with the death bowling. In the last game, in the last five overs we gave away only 27 runs. It was a very good effort. Ashish Nehra bowled five overs in a row. There was a bit of reverse swing going which actually helped us a bit,” the skipper said.

"Normally you don't get wickets like that. It was not a big ground with the straight boundary not more than 60-65 yards. Since the wicket was so nice, it was easy for the batsmen to clear the field. It's important not to give easy singles," he added.

"In the last T20 game here there was good bounce. The wicket for the match looks like good and flat. I had a conversation with the curator," Dhoni concluded.
readmore »»