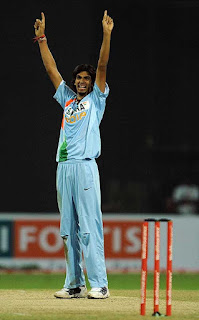 By Syed Khalid Mahmood
The standard of umpiring may have improved in general over the years but the Indians have continued to be at the receiving end more often than any other team. What a pity that Sachin Tendulkar became the victim of a dubious umpiring decision for the second match running.
Even more disgusting was the dismissal of Yuvraj Singh. He was in complete command of the situation, having done all the hard work against the champion spinners. Just when he was readying himself for the onslaught he got a shocker of a decision that signaled the end of his innings against the run of play.
The credit goes to the Indian skipper Mahendra Singh Dhoni who kept his boys motivated despite having 50 to 75 runs short of the total they would have posted in normal circumstances.

India’s total of 256 still proved good enough to win the day for them primarily due to two reasons. Their bowlers remained charged up during the entire length of the Sri Lankan innings displaying self-belief and strength in character. Then the home batters were found struggling in coming to terms with the quality bowling.
The inconsistency of the Sri Lankan top-order batsmen must have been at the back of Dhoni’s minds when he came out to defend a not too formidable total. The Indian fast bowlers, Ishant Sharma and Zaheer Khan, went hard at the home batsmen and the fancied trio of Sanath Jayasuriya, Tillekartne Dilshan and Kumar Sangakkara was back in the dressing room with very little on the board.
The fourth wicket century partnership between skipper Mahela Jayawardene and Thilina Kandamby revived the Sri Lankan hopes but the Indians bounced back in the final overs to deny the hosts the chance of squaring the series.
The ever-improving Ishant Sharma was at his best when his team needed him most. So was Zaheer Khan, who had an ordinary opening spell. The two Indian fast bowlers rose to the occasion in the closing stages of the game and even the gutsy Kandamby, returning undefeated on 93, could not change the course of the game.
The youthful Indian side once again proved the point that they have mastered the art of handling the pressure, an area their predecessors were found wanting it. The resilience of the present lot keeps their opponents under stress. 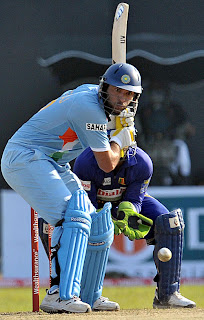 Talking about stress, it were the umpires rather than the bowlers who were instrumental in limiting India to 256 in 50 overs. The Indians showed remarkable improvement in their technique while negotiating the spin duo of Muttiah Muralitharan and Ajantha Mendis but they were undone by a couple of umpiring blunders.
The early loss of Sachin Tendulkar, declared lbw on a ball heading down leg, was covered up by the duo of Virender Sehwag and Gautam Gambhir who set up the platform for a huge total.
Yuvraj Singh and Suresh Raina led the recovery after the dismissals of Sehwag and Gambhir in quick succession. Skipper Dhoni kept the momentum going in the company of Yuvraj and India were sight in a total well over 300. But Yuvraj was given lbw when he actually got a big inside edge onto his pads. This decision completely derailed India’s progress and Sri Lanka cashed in on the opportunity by drying up the runs in the last 12 overs that yielded little over 50 runs.