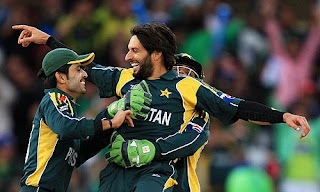 Shahid Afridi has tried to be diplomatic while speaking to the media ‘officially’ but his body language has been quite different in off-the-record sessions. Sometimes he has been found very arrogant and occasionally he passes the impression of disowning the squad for the ICC World Twenty20 2010 having been selected before his appointment as captain.

Shahid probably wants to have the cake and eat it too. He aims to kill two birds by firing just one shot. No questions would be asked obviously if the team returns triumphant from the Caribbean and he will quite proudly claim the credit for victory. And if the team gets jolted he might simply say the combination given to him was not to his liking.

“Our team is geared up to tactically and technically live up to the expectations of the nations to accomplish the task in the West Indies,” he told APP Correspondent Ehsan Qureshi in an interview in Karachi prior to his departure to Lahore on his way to St.Lucia on April 24.

“Without the prayers of the nation and supporters across the world, Pakistan team can not achieve anything. Besides playing patriotically for Pakistan we needed support of countrymen and media,” he added.

“My appeal to the national media would be healthy in criticism but should keep the interest of Pakistan above all. My mission as a captain and with the support of players and team management to keep the team away from any controversy,” he pointed out.

“I like to lead the team from the front because of my style and I always believe in an aggressive approach which had his stigma throughout his career. We are fully equipped to face the challenges in West Indies. He got well balanced team in batting and bowling and we have to further lift the standard of fielding,” the Pakistan captain remarked.

“Fielding is crucial area in this fastest version of the game and a lot of hard work was done to raise the standard. We are ready give our best and rest with Almighty,” he stressed.

Shahid dispelled the impression that Pakistan may face trouble in batting department. “It’s altogether different in T20 cricket. We got a lot of firepower in our batting. We are initially planning to start the innings with Muhammad Hafeez and Kamran Akmal. We have experienced Misbahul-Haq, Abdul Razzaq, Umar Akmal, Khalid Latif and Salman Butt,” he said. 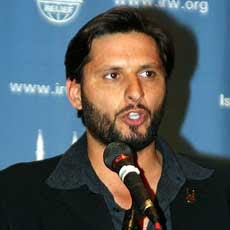 He expected spinning tracks in the West Indies and considered Pakistan’s bowling attack potent enough to come good on all kind of surfaces.

“Saeed Ajmal and Muhammad Hafeez would be the off-spinners to complement my leg-spin. We have adequate resources in the fast bowling department as well with the likes of Mohammad Aamir, Mohammad Sami, Mohammad Asif and Abdul Razzaq,” the Pakistan captain believed.

“T20 is very tough and demanding cricket and we can afford to take any team lightly. We even can not take Bangladesh lightly as they possess a number talented cricketer in their line-up,” he concluded. readmore »»