Well it’s never easy to predict the outcome of a cricket tournament to last over a month and with all the leading teams of the world participating. I had made an assessment on this blog before the start of the ICC Cricket World Cup 2011 that India and Sri Lanka are more likely to be the finalists this time. And I have been proved correct.

My assessment was based on the fact that these were the best two teams to have entered the competition being held in the Indo-Pak sub-continent where the pitches were to suit their style of play. Obviously they also had the resources and the firepower to do it. And they have done exactly that, albeit after some tense moments.

Both India and Sri Lanka had to prevent miracles in the quarter-finals as well as semifinals at the hands of their respective opponents to cruise into the final. India obviously faced the tougher task of knocking out the formidable Australia and then their arch-rivals Pakistan while Sri Lanka just had to play their normal game to rout England and New Zealand, both of whom had come that far exceeding all expectations.

So after a long time the top two teams of the tournament will be clashing in the final of the World Cup. India and Sri Lanka would be battling it out at the Wankhede Stadium, Mumbai, for the trophy on April 2. 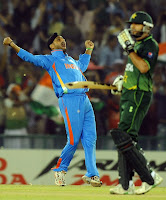 After having eliminated Australia and Pakistan, hosts India would be in a happier frame of mind in the final but they won’t be taking anything for granted because Sri Lanka have always been their bitter rivals.

Talking about rivalry, there was enormous tension before and during the semifinal tie between neighbours Pakistan and India at the Punjab Cricket Association Stadium in Mohali on March 30.

Pakistan carried with them the confidence of whacking big guns Sri Lanka and Australia in the league matches to finish at the top of the points table in Group A and their morale was boosted further with a cakewalk win over the West Indies in the quarter-finals.

The decision of the team management to persist with left-arm quickie Wahab Riaz instead of risking veteran speedster Shoaib Akhtar paid rich dividends as the youngster responded with a five-wicket haul to limit the Indian total to 260 after a whirlwind start provided by Virender Sehwag. 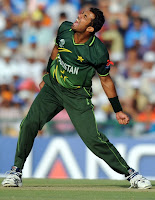 Off-spinner Saeed Ajmal also bowled exceptionally well to bamboozle the Indian batting stars who were clueless against him. Not surprisingly the catching was terrible to say the least otherwise they could have bowled India out inside 50 overs.

The Indian bowlers, for the second time in as many matches, were right on the money and they were shrewdly handled by Captain Cool, Mahendra Singh Dhoni. The late charge from Misbah-ul-Haq couldn’t change the course of the proceedings. Both the losing semifinalists, Pakistan and New Zealand, deserved to be complimented to have progressed that far because neither of them was expected to go beyond the quarter-finals.

Australia and South Africa, who were considered the main challengers for the India and Sri Lanka, crashed in the quarter-finals. While the Australians, the winners of the last three editions of the World, went down fighting against India, the surrender of the South Africans against New Zealand came up as a big shocker.
readmore »»