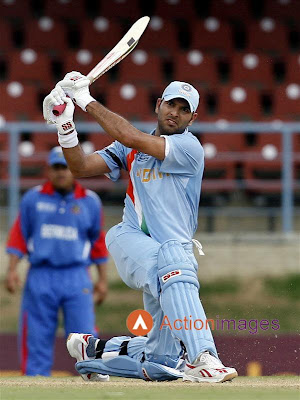 It’s not often that an individual dominates a team game as decisively as India’s Yuvraj Singh did against England in the second One-day International of the seven-match series at Maharani Usharaje Trust Cricket Ground, Indore, November 17.

Yuvraj, we all know, is a special talent. But he has come up with amazing performance in the first couple of ODIs, pocketing Man of the Match award on both the occasions. More importantly he has contributed immensely to the cause of the team enabling it to double the advantage at Indore.

Yuvraj almost single-handedly won the day for India at Indore where followed up his superlative knock of 118 off 122 balls with the exceptional figures of 4 for 28. One could not have asked for better all-round performance in a single game. It would have made the likes of Ian Botham, Imran Khan and Kapil Dev proud.

England found themselves at the receiving end for the second time in a row at the hands of the devastating Yuvraj. If the versatile left-hander had demolished with mind-blowing batting displaying in the first ODI, his all-round performance caused even greater trouble for the tourists in the following encounter.

Unlike the opening game at Rajkot where India got off to a flyer, the hosts were in disarray in the opening hour and the bold move of Mahendra Singh Dhoni to bat first after calling correctly in conditions not ideal for free flowing strokes was starting to backfire.

Stuart Broad was firing on all cylinders and three top-order wickets had perished very quickly indeed. The bowling was on top and the runs were hard to come by. Enter Yuvraj Singh and the complexion of the match changed.

"We had a chance at 29 for 3. We lost ourselves to Yuvraj. He was fantastic,” conceded the sporting England captain Kevin Pietersen in the post match ceremony. He must be wondering how to cope with the Yuvraj factor in the remaining matches.

“Great performance by Yuvi and Gambhir. You've got to change the target every 5 to 10 overs. As the partnership between them grew we kept raising our target,” the jubilant Indian skipper Dhoni observed.

“I have been training hard over the last few months and it's paying off. At 29 for 3 I wanted to assess the wicket, spoke to Gambhir a lot about the target. There were some shots you couldn't play on this wicket," the man of the moment reckoned.What a fabulous series Yuvraj is having right now. He seems in the middle of another purple patch that should gladden the hearts of his millions of fan spread all over the globe.

In the first ODI, he hammered an unbeaten 138 off only 78 balls that included as many as six sixes and 16 fours. His blistering knock helped India in posting their highest-ever total at home. The score could have even gone to 400 had Yuvraj, batting with a runner, not mistimed a couple of big hits in the final over.