Defending champions Beaconhouse School whipped Ladybird Grammar School by 10 wickets in the inaugural match of the eighth edition of the PVCA Inter-School Cricket Tournament 2016 for the Omar Trophy which got underway at the Karachi Gymkhana Cricket Ground on September 1. 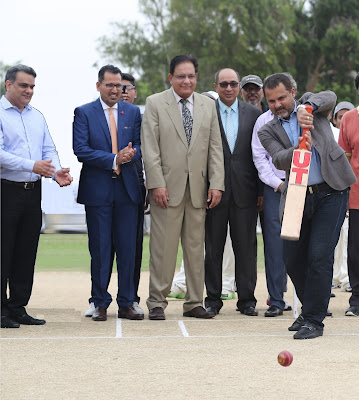 Electing to bat, after winning the toss, Ladybird Grammar School was bowled out for 93 in 22.5 overs. Chasing a modest target of 94 in 40 overs, Beaconhouse raced to the target in a matter of 13 overs without losing any wicket.

Ladybird Grammar School could not recover losing early wickets. The middle-order batsmen also failed to click against the potent spin-cum-pace attack of the opponents. Mr Extras turned out to be the leading scorer with 17 while only Anas Ali (16), Amanullah (14) and Abdul Rafay (14) could reach double figures.

The innings was rocked by the Beaconhouse School left-arm spinner Waleed Hasan Shahid (3-14) and he was adjudged Man of the Match. He was ably supported by leg-spinner Muaz Bin Sulaiman (2-13) and medium-pacer Hamza Tahir (2-16).

The Beaconhouse School opening pair of Ahmed Kabir and Haris Bin Tahir completed the job in style, adding 96 for their unbroken opening partnership in only 13 overs. Ahmed Kabir was the more aggressive of the two, smashing one six and eight fours in his unbeaten 59 off 52 balls while Haris Bin Tahir struck two boundaries in his undefeated 25 off 26 balls.

Before the start of the match, a colourful ceremony was held in which Moin Khan, a former Pakistan captain and the head coach of Quetta Gladiators, declared the tournament open. All the 32 participating teams were present on the occasion with the placards of their respective institutions.

Moin Khan, while appreciating the efforts of the Pakistan Veterans Cricket Association (PVCA) for holding the Inter-School event one more, advised the participating students to avail the opportunity of stealing the limelight by performing consistently in the high-profile tournament.

Fawad Ijaz Khan, Chairman, PVCA, in his welcome remarks, expressed the hope that the level of the competition will be on higher side as the best school cricket teams of the metropolis will be in action during the next two and half months to determine the champions at the National Stadium, Karachi, on November 15.

The PVCA is organizing the Inter-Schools tournament in Karachi for the eighth time, having launched it with great fanfare in 1999. The event is being sponsored by Omar Associates (Pvt) Ltd with Bank Alfalah Ltd being the co-sponsors.

The participating teams have been divided equally in eight groups. It includes 31 schools of the metropolis while a team of Karachi Gymkhana Schoolboys has also entered the tournament in which 55 matches are to be played at seven different venues.
readmore »»