In my estimation Air Marshal Nur Khan was Pakistan’s greatest-ever sports administrator whose era was full of accomplishments and glories. His leadership qualities were second to none but even more inspirational were his traits of bravery and fortitude. He was a dynamic person who believed in innovation and bright new ideas. 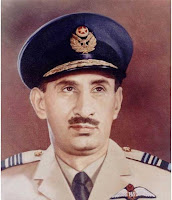 His contribution to sports as well as the armed forces has been legendary. He was widely respected his integrity besides his razor-sharp intelligence and outstanding management abilities. He passed away quietly at the Combined Military Hospital in Rawalpindi on December 15 where he had been admitted just three days ago when suffering from chest infection. He was 88.

Air Marshal Nur Khan served with distinction as the Commander-in-Chief of the Pakistan Air Force from July 1965 to July 1969. He later was appointed Governor of West Pakistan in August 1969.

He was instrumental in the take-off of the country’s national carrier, Pakistan International Airlines (PIA), during his tenure as Managing Director from 1959 to 1965. Upon the special request of the government, he was reappointed as head of PIA in 1973.

He turned around the destiny of Pakistan sports with his visionary approach. He headed the controlling bodies of hockey, cricket and squash and brought about revolution of sorts by introducing policies that yielded results.

Pakistan won the Olympic hockey gold in 1968 and 1984, when he was at the helm of the affairs in the Pakistan Hockey Federation (PHF). He conceived the World Cup as well as the Champions Trophy. Pakistan remained a superpower in hockey until he was there.

The Air Marshal led the cricket board from 1980 to 1984. The World Cup, whose first three editions were held in England, came to the sub-continent mainly due to his initiatives. He also pioneered the idea of neutral umpiring.

Pakistan reigned supreme in squash as well during his era. He was chiefly responsible for developing infrastructure that produced world champions Jahangir Khan and Jansher Khan.

He commanded awesome respect from all quarters even after retirement and we same its glimpses during a reception that was organized in his honour by the Brotherhood Sports Society of Pakistan (BSSP) in Karachi in March 2007.

I have attended and covered innumerable receptions over the years but this was one unforgettable evening on many counts. The Darbar Hall of Hotel Sheraton was packed to capacity as the session of speeches, in which glowing tributes were paid to Air Marshal Nur Khan, lasted more than two hours.

There was a long list of dignitaries who desired complimenting the Air Marshal but the organizers had to curtail it due to time constraints. Those sitting in the audience were luminaries of their respective fields. Hardly would one find so many living legends under one roof.

Hosts Waqar Hasan, himself a dashing cricketer of Pakistan’s early years, and General Tauqir Zia, a former Chairman of the Pakistan Cricket Board (PCB), showered Air Marshal Nur Khan with the kind of praise that he so richly deserved.

During the entire length of the programme not a single soul was observed making any movement. Everyone was glued to his or her seat. The Air Marshal was the last speaker and what a speech he delivered. The applause he received had reflected his immense popularity and unmatched respect.