India do justice to themselves in first ODI against New Zealand 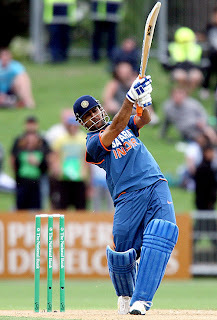 After having flopped in the two-match series of the Twenty20 Internationals, awesome India finally showed glimpses of their brute force in the first One-day International against New Zealand at the McLean Park, Napier.

India, the reigning world champions in the shortest version of the game, had been overpowered by the hosts in both the T20 games that made everyone unsure about the outcome of the ODI series to be spread over five matches, weather permitting.

India, standing head and shoulders above their opponents in every department of the game, had lived to the reputation of failing against New Zealand in the T20 series but they did play to their abilities in the first ODI and the result was seldom in doubt.

Thankfully from the viewpoint of the millions of their supporters and well wishers in different corners of the world the Indians did justice to their talents in the game and there was hardly any chance for the hosts to think in terms of stealing another win.

The present Indian side is so much superior to New Zealand in terms of experience as well as talent. The gap between the two teams is simply too much and only self-destruction on part of the Indians can allow the hosts to come close in any form of the game on any kind of surface.

Rains did disrupt the proceedings in the first ODI but it couldn’t prevent the Indians from controlling the game all along. One can’t expect the inexperienced and youthful New Zealand outfit to come to terms with the mighty Indians whose every member of the team is a match-winner in his own right.

It are mainly the outside factors that derail the Indians, more so against New Zealand, so let us keep our fingers crossed about the remaining games. It remains to be seen if Mahendra Singh Dhoni and his inspired lot will continue dominating the ODI series or it will be otherwise.

There was nothing extraordinary in the first ODI where it was business as usual for the Indians. Virender Sehwag got India off to a cracking start in his typically flamboyant style. Sachin Tendulkar was happy to play the second fiddle to Sehwag and then the skipper arrived himself at number three.

Dhoni has proved many times that he has the capability to bat up the order as he has the rare ability of changing gears at will. After Sehwag’s departure there was a period when Yuvraj Singh got bogged down much to the disappointment of his fans. But Suresh Raina provided the skipper the kind of support that was needed to raise the total substantially and India’s final score of 273 off 38 overs gave them a very solid platform.

The New Zealanders lost early wickets and they were always behind the clock. They had moved to 111 for four in the 21st over when the rains came again. They needed 105 off 43 balls when the play resumed, a task that was beyond their reach.

The form of the champion off-spinner Harbhajan Singh must have gladdened the hearts of the Indians. Extracting appreciable turn, he grabbed three wickets in four balls after having been smashed for boundaries on first two balls by Martin Guptill who topscored for the hosts with 64.