Pleasures of launching a book

I am feeling mighty relieved after the launch of my book Cricket Fever: A History of Pakistan-India Tours at the Karachi Gymkhana Banquet Hall on July 17. 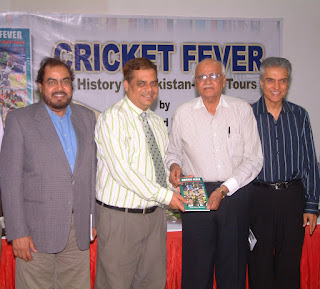 I am delighted to have delivered as there were only 96 hours at my disposal when the Federal Sports Minister, Pir Syed Aftab Hussain Shah Jilani, had consented to be the chief guest in the ceremony.

He had an unusually busy schedule for the weekend and it was not possible for him to come over on July 18 as suggested by me. Since I had to rush to Islamabad on July 19 for a few days, I was eager to have the book launched before my visit to the federal capital.

The Minister was willing to grace the occasion on July 17, if I agreed. I looked towards Ehsan Qureshi who was with me when this discussion was taking place and we thought it was worth making extra effort to launch the book a day earlier than scheduled.

From 5 pm on July 13 to 5 pm on July 17 were probably the busiest 96 hours of my life. That was definitely at the back of my mind when I declared in my speech that the evening of July 17 was the memorable one in my career yet.

The writing and publishing a book in Pakistan in particular are considered an arduous task. The launching of a book is not a straightforward proposition either. It’s probably tougher that’s why not all the books that somehow manage to see the light of the day in this part of the world are launched. 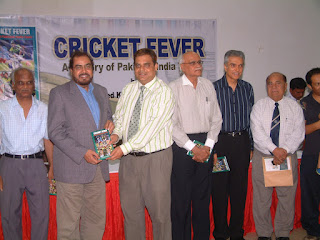 I consider myself fortunate to have been blessed with a few loyal and trustworthy friends who are also there for me. My mother’s prayers keep me inspired as do the smiles of my two little daughters, Javeria and Beenish, who always urge me to do justice with my talents.

These motivating factors prompted me to accept the challenge of organizing the book launch at a notice of just four days. Trust me I would have never mustered this courage to host a full-fledged function had Ehsan Qureshi not been around there with me all along. He inspired me to mobilize all our resources with a cool head and not to press the panic button.

Well the seating capacity in the Banquet Hall of Karachi Gymkhana was for 120 guests, besides the space for 12 dignitaries on the stage. Wasn’t it a wonderful sight with just a few chairs in the entire hall being unoccupied. It was nearly cent percent attendance. With drizzle having caused traffic jam on many roads and the threat of more rains it was really great to have watched guests assembled in time.

The chief guest, Pir Aftab Jilani, also reached at the designated time, as did Dr Mirza Abrar Baig, who was presiding over the ceremony. All the other distinguished speakers, Ehsan Qureshi, Prof Ejaz Ahmed Farooqui, Azeem Sarwar, Younis Rizwani, Aziz Memon, Shoaib Ahmed Siddiqui and Shoaib Mohammad also arrived in time and Sardar Khan called the meeting to order at half past six. 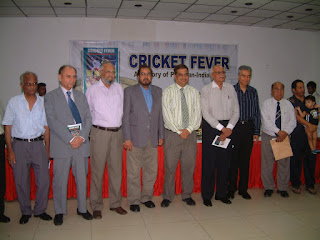 I don’t know if I deserved all those praises or now but trust me it was music to my ears. So many stalwarts of their respective fields showering me with praise publicly in the presence of the media was something I might never imagined when I had started writing for cricket magazines as a teenager some 29 years ago.

The speeches lasted around 75 minutes and it was thrilling to be the focus of attention sitting comfortably on stage. Sardar Khan and Ehsan Qureshi took upon themselves the responsibility of handling the stage management to take pressure off my head.