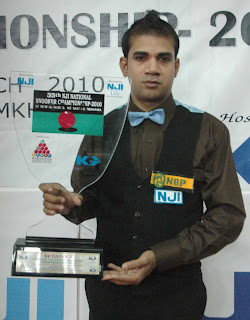 There was no stopping Mohammad Sajjad from recapturing the national crown. Easily the most talented of all the young cueists to have arrived on the scene in the recent past he was in complete control while routing Asjad Iqbal in the all-Sargodha final of the NJI 35th National Snooker Championship 2010 at the Karachi Gymkhana on March 8.

The presentation ceremony was held soon after the final in which Tahir Ahmed, Managing Director, New Jubilee Insurance (NJI), was the chief guest. Quite a few office-bearers of the Pakistan Billiards & Snooker Association (PBSA), including their President, Alamgir Anwar Shaikh, were also present on the occasion.

Tahir Ahmed, having become a familiar personality in the snooker circles, presented the glittering trophy alongwith a purse of Rs50,000 to Muhammad Sajjad while Asjad Iqbal collected the runner-up trophy with a reward of Rs30,000. Sajjad also got special cash awards for registering the tournament’s solitary century break in the final.

The 26-year-old Sajjad, who had created a sensation by winning the National Championship on his debut a couple of years ago, was in complete control in the final against Asjad, five years his junior.

Unlike the last year’s final in which Sajjad was overshadowed by Mohammad Asif, he went about his business in leisurely fashion against his young opponent who he had also coached for a while in their hometown.

Sajjad’s dominance could be gauged from the fact that he registered one big break after another. He recorded breaks of 47 and 53 in the second frame before hammering one of 43 in the third.

He chalked up the first century break (117) of the competition in the fourth frame. His thirst for breaks didn’t end there as he blasted ones of 76 and 41 in sixth and seventh frames respectively to seal the fate of the match.

The young Asjad, having represented the country in last year’s Asian and World Under-21 Snooker Championships could not reproduce the form that had taken to the final against the heaviest of odds. 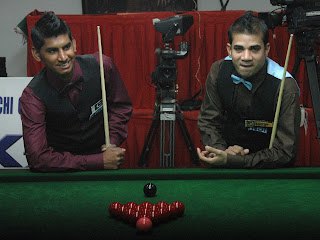 The only consolation for Asjad was preventing a whitewash that had earlier seemed imminent when he was trailing 0-7 in the best of 15 frame encounter. He snatched two frames in a row to make it 2-7 but Sajjad didn’t allow any more liberties to him.

The NJI 35th National Snooker Championship 2010 lasted about a week. A total of 34 cueists took part in the event who were divided in eight groups for the first round of league matches. The knockout stage began with the round of 16.

Quite a few promising youngsters grabbed the opportunity of demonstrating their growing stature with Asjad turning out to be the standout package. readmore »»