The condition of the 80-year-old hockey legend, Anwar Ahmad Khan, has improved following a freak accident at his house a couple of weeks. He has been discharged from the hospital. 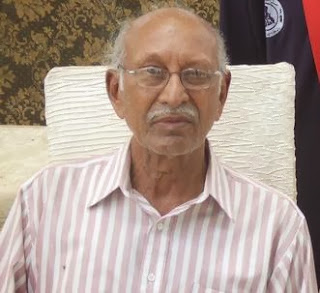 His son Dr Adnan Anwar, who is himself a vastly experienced physician, revealed that the former Pakistan captain, regarded as the greatest-ever centre-half to have graced the hockey arena, has had an extended stay at the hospital due to the various complications caused by his sudden collapse while having shower.

“Quite a few bones of his have been damaged as he appeared to have slipped in the portion right below the shower. The lungs have been disturbed and there are marks of swelling on his head as well. Various tests are being carried out and that’s why he had more than one week stay at the hospital.” he disclosed.

The great Olympian remained in great spirits and he didn't even mind meeting friends and acquaintances who came to visit him in his room of Karachi’s leading private hospital which is a stone’s throw away from his residence.

“I have had numerous injuries during my playing career but this one looks little serious. As I do have the knack of seeing off tough moments, I am confident that, with the prayers and best wishes of family members and friends, I will be able to regain my composure soon,” Anwar Ahmad Khan remarked in a confident manner but his voice choked momentarily.

Although he was surrounded by a team of doctors, the hockey memories were still shaking his mind and he was able to recall the breaking of his teeth during an Asian Games encounter against Korea in 1958.

“Trust me I had returned to the field after taking the first-aid and played the rest of the match to ensure that no goal was scored against Pakistan. I also played the following game against India and didn’t let them score a single game. And we won the gold medal due to better goal average than India,” he recalled with pride in his eyes.

His family members felt greatly relieved and her daughter, Dr Shahneela, described the recovery as a new lease of life.

“The manner in which he was brought to the hospital on January 2 had really scared us. He was in such critical condition after the collapse that we were not even sure if he would be able to reach here. Thanks God he responded to the treatment and his condition started improving,” she observed.

“As the whole nation knows my father is a brave man. He is never short of will power. We are hoping and praying for his quick recovery,” she added.

The great Anwar Ahmad Khan, who was instrumental in earning as many as five medals for the country in the Olympic Games and Asian Games from 1956 to 1964, has had health issues during the last few years in particular. His eyes had to be operated upon while he is also suffering from diabetes.
readmore »»