The history repeated itself to the extent that India were unable to press home the advantage despite being in control. They remained in the driving seat most of the time in the third and final Test against South Africa in Cape Town only to be denied a victory in the end. 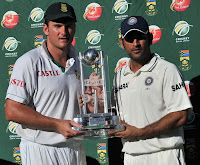 That has remained the case more often than not most of the time. The Indians have had the knack of not winning a game despite dominating it from start to finish. This time Jacques Kallis became their nemesis. It could have been anyone else either. The tail-enders did just enough to ensure that the visitors didn’t have enough time to chase the target.

I was pretty confident of India doing well in South Africa this time round because they had their most potent side of the recent times. Regardless of their top ranking in the Test arena they were in possession of the most formidable side in world cricket.

India should have won the Test series, which would have been their first on the South African soil. They had come very close to doing it on their previous tour and they came even closer this time. 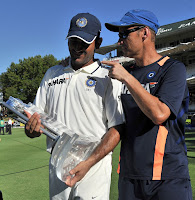 Any other team dominating South Africa for so long in the field would have emerged triumphant in the Cape Town Test but not India. They had the hosts in complete disarray on the fourth day and it looked a matter of time for the visitors to bowl the hosts out for a low total and knock off the runs quite comfortably.

But the South Africans were able to recover with the tail-enders doing the job with the injured Kallis. Slowly the match was taken away and by the time their last wicket fell the pressure had shifted to India because they needed to play out the final day rather than think in terms of getting 341.

Even 341 wasn’t a huge target. In fact it was less than four an over on a pitch still having plenty of runs. The outfield was lightening quick and the batsmen were going to get value for their attacking shots.

I don’t remember India having ever successfully chased a target in any Test match where they had to maintain a challenging run-rate. They have tried many times only to be left short of it in the end. Conversely they have lost every time when their opponents have taken them on in similar conditions. 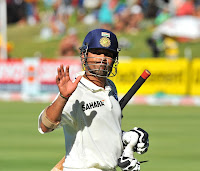 I think the Indians were well aware of their history and they didn’t dare making an attempt to chase down 341 on the final day of the Cape Town Test. Even Virender Sehwag, acclaimed as the most destructive batsmen to have played cricket since Don Bradman, remained subdued during his long stay at the crease.

Not only Bradman but even the lesser mortals like Matthew Hayden and Adam Gilchrist would have gone for it and there’s more likelihood of them having succeeded than not.

The Indians, obviously, could not have trusted their luck hence they preferred to play safe. They accomplished their goal of drawing the third Test that meant the series remained locked at one-all which I don’t consider a fair result.
readmore »»