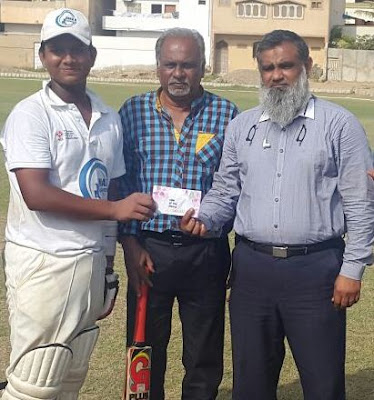 Leg-spinner Asadullah (4-23) ran through the top-order with medium-pacer Abdul Rafay (2-17), later adjudged Man of the Match, and left-arm spinner Amanullah (2-19) sustaining the pressure.

None of the CAA Model School batsman could play a big knock against the steady spin-cum-pace with opener Mohammad Maaz (22 off 49 balls) being the top scorer.

CAA Model School, however, opened up the contest while defending its modest score and they seemed on top when Ladybird Grammar School lost the sixth wicket with 70 still needed for victory.

The 44-run eight wicket stand between Abdul Rafay and Anas Ali brought Ladybird Grammar School back into the game after medium-pacer Asna Sarfraz (3-28) and leg-spinner Umar Shah (2-25) had routed the top half of the batting line-up.

It was still anybody’s game when Anas Ali was dismissed for 22 off 27 balls at the total of 102 but Abdul Rafay’s unbeaten 21 off 46 balls allowed Ladybird Grammar School to reach the target of 128 in the 31st over with three wickets standing.

Batting first, St Patrick High School amassed 255 for eight in the allotted 40 with opener Mohammad Usman whacking two sixes and 12 fours in his 71-ball 100. Exxon John’s unbeaten 38 off 47 balls prevented them from getting bowled out after a middle-order collapse.

The spin duo of Osama Khan (2-41) and Mohammad Abbas (2-44) pulled it back for Foundation Public School after the early onslaught from Mohammad Usman.

The introduction of spinners slowed down the rate of scoring and Foundation Public School lost wickets at regular intervals to be restricted to 183 for nine.