Grand Master Mohammad Ashraf Tai, the most famous martial artist of Pakistan, has been recuperating steadily after having spent nearly five weeks in hospital. He has even resumed attending the karate centre he had founded more than four decades ago. 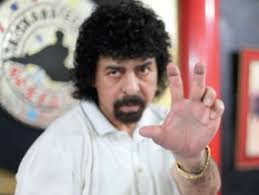 He had collapsed at the Tai’s Karate Centre on March 30 and was rushed to hospital in a critical condition. A diabetic for the last many years, his kidneys were badly affected when his blood pressure dropped to the dangerous levels.

He remained in intensive care unit of the Liaquat National Hospital (LNH) for quite a few days before being finally discharged after five weeks.

Soon after being discharged from the hospital earlier this month, the Grand Master has now started visiting the centre much to the relief and delight of the large number of his trainees.

“Thanks God, Sir is back. He is the source of inspiration for the trainers as well as the trainees. All of us remained greatly concerned when he was hospitalized and his return at the centre has been warmly greeted,” Grand Master Farooq Palla observed while heaving a sigh of relief.

“His mere presence at the centre means a lot to us. We had been praying for his recovery and thankfully our prayers have been answered,” he added.

Grand Master Ashraf Tai himself is in high spirits after having made a comeback at his own centre after being away for more than six weeks.

“I am grateful to Almighty Allah to have blessed me with a new life. I have recovered literally from the deathbed thanks to the continuous prayers of family, friends, well wishers and students. Both my kidneys failed. But with help of Almighty and great efforts of doctors I have survived,” he remarked in a conversation on June 16.

“Indeed the last couple of months were traumatic to say the least. There were times when I was not responding to the treatment and the doctors feared for the worst. But their continued efforts and optimism yielded results as I started to recover after being in very critical condition for far too long a period,” the Grand Master recalled.

“Obviously some more time will be needed for me to regain full fitness but I am still very happy to be breathing normally,” he stated.

He started coaching a group of six students at the Hill Park. As the number of young karate enthusiasts kept growing, he moved to the KGA Gymkhana at M A Jinnah Road where the centre is still housed.

He had created a sensation by overpowering Stanley Michael of Malaysia in the final of the Afro-Asia Championship in 1978. He then confirmed his superiority in the continent by outwitting Japan’s Koha Yash a year later.