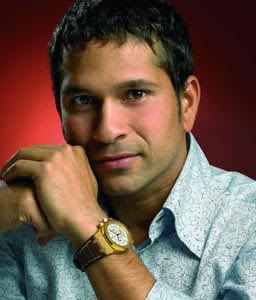 By Syed Khalid Mahmood
Sachin Tendulkar must be wondering if he would be granted the opportunity of getting some runs in the ongoing ODI series which India has pocketed in style with two games to spare. The hat-trick of his victimization was completed at the Premadasa Stadium in Colombo on February 3 during the course of India’s 147-run win over Sri Lanka.
Tendulkar has been wrongly or mischievously given out by the umpires of different countries on numerous occasions in his two-decade long illustrious career but it’s probably only for the second time in his career when he has been meted out unfair treatment on a trot.
One series that comes to my mind in which Tendulkar was singularly targeted was in Australia in 1999-2000 when he was also the captain of the team. India relied so heavily on him in those days and the tough umpiring calls cost his team all three Tests that summer.
Things have changed now. Tendulkar indeed remains Tendulkar even today, having lost none of his passion or zeal to score, but presently he is one of the stars in the side that is studded with match-winners.
For the third time running Tendulkar was given out lbw to a delivery that was drifting past leg stump. It’s incredible really that he had been declared lbw in dubious fashion in the earlier two games as well. I am not sure why the umpires are not following the law of giving the benefit of doubt to the batsman whenever they are not completely sure if the ball would be hitting the stumps. 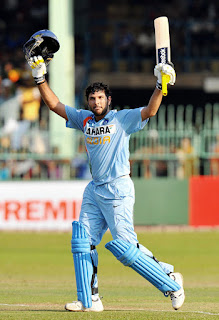 Tendulkar must be feeling frustrated because he’s in such great form and raring to have a go at the bowlers. We could only see a glimpse of it when he smashed a six off a free hit because that was his only scoring shot of the day. Who would blame him for getting only 18 runs in three matches when he has been sent back to the dressing room rather controversially every time.
Yuvraj Singh and Virender Sehwag more than adequately made up for the early loss of Sachin Tendulkar and Gautam Gambhir. The double-century third wicket stand broke the hearts of the Sri Lankan bowlers and a record total was always on the cards.
Both Yuvraj and Sehwag mauled the bowlers at will and their spectacular centuries put India in a commanding position. Left-handed Yuvraj hammered 117 off 95 balls before becoming the victim number 502 for Muttiah Muralitharan enabling the great off-spinner to equall Wasim Akram's world record of one-day wickets.
Sehwag was no less explosive while scoring 116 off 90 balls. India were poised for a total in the region of 400 when he was run out in the 35th over at the total of 265. But skipper Mahendra Singh Dhoni looked out of sorts and even Yousuf Pathan’s 33-ball half-century could not take the score beyond 363 in 50 overs. 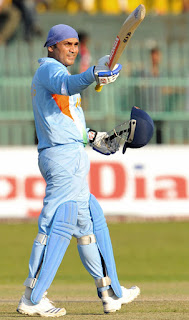 Sri Lanka hardly stood any chance of reaching the target of 364 although stranger things have happened against India in the past. With three lively fast bowlers at their service the visitors had no cause to panic while defending the huge total.

As expected the pace trio of Zaheer Khan, Praveen Kumar and Ishant Sharma sealed the fate of the match by rising to the occasion in the first 20 overs of the Sri Lankan innings. The stage was set for the young left-arm spinner Pragyan Ojha to make an impression when he was handed over the ball after the powerplay overs. He bowled superbly to grab four wickets including that of Kumar Sangakkara, who topscored for the hosts with 83.
readmore »»