The top 24 cueists of the country, along with a couple of most promising juniors, will be taking part in the eighth edition of NBP Ranking Snooker Championship 2016 to be played at the NBP Sports Complex in Karachi from August 15 to 22. 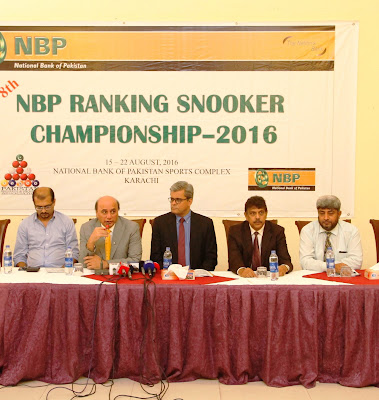 The details of the eight-day event were unveiled by Alamgir Anwar Shaikh, President, Pakistan Billiards & Snooker Association (PBSA) and Ovais Asad Khan, Executive Vice President, National Bank of Pakistan (NBP), in a media briefing at the Karachi Gymkhana on August 10.

The participating 26 cueists have been divided in four groups for the preliminary rounds which will be spread over five days. The winners and the runners-up of each group will qualify for the knockout rounds, starting with quarter-finals.

Both the semifinals as well as the final will be telecast live on Geo Super, the premier sports television channel of the country.

The championship will be offering prize money of Rs 150,000 with the winner to take home Rs 60,000 and the runner-up to receive Rs 35,000. The losing semifinals will be getting Rs 15,000 each while the losing quarter-finalists will be compensated with Rs 5,000 each. The highest break also carries a purse of Rs 5,000.

Speaking on the occasion, Alamgir Shaikh acknowledged the support of the Pakistan Sports Board (PSB) and the NBP in the development of snooker while also making a mention of other sponsors. 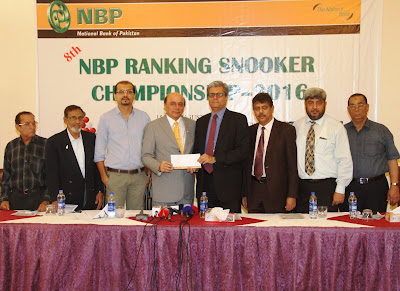 “The institutional support of PSB and NBP in particular has helped enormously in boosting cue sports over the last eight years. The decision of NBP to employ the cueists in its folds gave us a sort of lifeline,” the PBSA President noted.

“Geo Super, by televising the semifinals and the finals of literally every national ranking tournament over the years, has played a massive role in popularizing snooker all over the country,” he added.

Ovais Asad Khan, heading the Strategic Marketing and CSR divisions of NBP, pledged to continue supporting the cause of sports in general and snooker in particular.

“We are carrying forward the mission of our predecessors of producing champions. Besides sponsoring national competitions, we have had the policy of grooming the young talent in the field of sports who have gone on to serve the cause of the institution as well as the country with distinction. In the near future, we plan to engage a couple of emerging cueists to reinforce our snooker squad,” he announced.

To a question of creating more facilities for snooker at the NBP Sports Complex, he informed that a multipurpose stadium for indoor games was being built which will facilitate greater space for cue sports activities.

Later he presented a cheque of Rupees one million to the PBSA President, being the sponsorship fee of the 8th NBP Ranking Snooker Championship 2016.
readmore »»