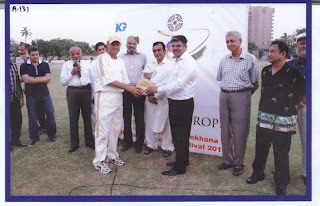 Set a challenging target of 202 in 20 overs, Omar CC, having stunned a few fancied rivals in the earlier games, was in the driving seat until the 13th over but they lost their seven wickets for 32 runs in 5.2 overs and KESC won the match by 36 runs.

The fourth wicket stand of 84 between Asif Raza (49 off 27 balls) and Farrukh Rizvi (41 off 23 balls) had put Omar CC on top as they needed just a further 69 in more than seven overs.

A couple of umpiring blunders derailed Omar CC who appeared in complete command of the situation until the dismissals of Asif and Farrukh in quick succession. Then the spin trio of Noman Alvi (3-28), Rizwan Khan (2-13) and Shahzeb Khan (2-16) completed the job for KEC

The skipper of Omar CC, Nadeem Omar, was unable to hide his disappointment caused by the two umpiring decisions that denied his team from winning the tournament for the first time. Normally a very cheerful character he felt cheated by the umpires.

Many neutral observers present at the ground were also of the opinion that the two key umpiring decisions had changed the complexion of the game and both had gone against Omar CC, pointing in the direction of malpractices. 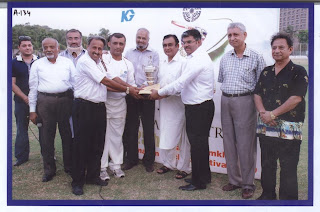 Tournament Director, Mian Azmat Hussain, who is also Vice President of the Karachi City Cricket Association (KCCA) besides being the owner of the famed club, Mian Azmat Professionals, reflected on the 25-year-old history of the tournament.

All-rounder Arif Mahmood, who lifted the Bahria Town Trophy, for being the skipper of the victorious Karachi Electric Supply Corporation (KESC), was also declared Man of the Tournament. He collected a cash award of Rs 15,000.