PCB and ICC on a collision course

The Pakistan Cricket Board (PCB) has issued a legal notice to the International Cricket Council (ICC) and by the look of things the chances of an out of court settlement are remote at the moment. 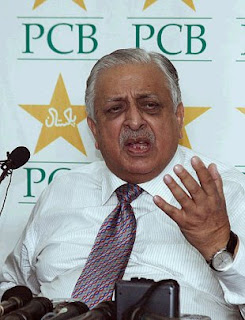 The notice was issued to the ICC President, David Morgan, through Mark Gay of DLA Piper, London, an experienced hand in the field of sports legal issues, having previously represented PCB as well.

In the legal notice the ICC has been asked to rescind the decision of the Executive Board being ultra vires and void.

The PCB has also informed the ICC that they would be shortly referring the matter for determination by an arbitral tribunal appointed in accordance with the Rules of the Court of Arbitration for Sport in Lausanne, Switzerland under the ICC Dispute Resolution Committee.

The PCB officials feel hard done by the ICC decision taken by its Executive Board on April 17. The PCB has contended that the views of the Sri Lankan captain, Mahela Jayawerdene, and ICC match referee, Chris Broad, were presented but the interview CD of the bus driver of Sri Lanka team that PCB had sent to ICC was never presented at the meeting and its transcript was circulated by e-mail to members after the meeting instead.

The PCB functionaries have complained that they were not provided with an opportunity to explain their position and in a slip shod manner, a decision was passed by at the Executive Board meeting whereby PCB was stripped off its right to co-host the 2011 World Cup with the safety and security concerns being the basis of this decision.
readmore »»