Driving to the Dreamworld Resort & Golf Club, located on the outskirts of Karachi in the vicinity of the Northern Bypass, has always been a pleasure. Even though the roads throughout the metropolis have been ruined by the one devastating spell of rain on July 18, there’s always a temptation to visit the Resort. 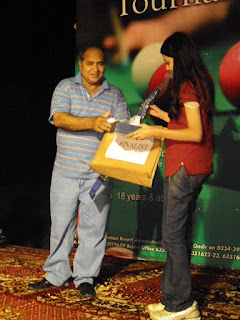 The finals of the 10th Dreamworld Cue Sports Championship 2009 were held on July 26 and as expected there was a sizeable crowd at the venue. Probably there was a bigger crowd at the Dreamworld Billiards Parlour than the one at the Karachi Gymkhana where the final of the Al-Haram Snooker Cup National Ranking Tournament was being played the same day.

The Dreamworld Cue Sports Championships, launched a decade ago, have been attracting good crowds since inception and it remains one of the showpiece events in their calendar. There has been greater coverage in the media for the last two years now since they have framed the policy of inviting them for the finals.

Shahid Nazir Minhas lived upto the billing in the 10th Dreamworld Cue Sports Championship by retaining the pool as well as snooker titles.

The curtain on the 10-day event fell here at the club’s billiards parlour on July 18 with the snooker final and the prize distribution ceremony in which Mohammad Yousuf, a former world champion, was the chief guest.

The tall and well-built Shahid Nazir, having appeared in the national ranking tournaments for quite a few years in the recent past, continued to dominate the snooker as well as the pool events of the Championship being organized by the Dreamworld Resort.

He was not all that stretched in the nine-ball pool final, played on a fast pace, in which he raced to 5-3 victory over Rashid Habib.

Saba Zubair Abbasi emerged triumphant in nine-ball pool for ladies as she overpowered Maliha Athar 3-1 in the final. 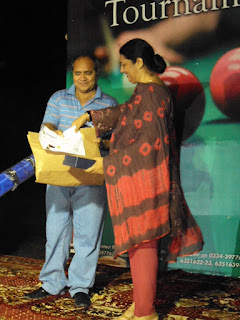 Syed Saud Hassan ran away with the top honours in the nine-ball pool for seniors, over the age of 45 years. He outclassed Abdul Sattar Shah 5-2 in what turned out to be a one-sided final.

The marathon snooker final delayed the presentation ceremony but the participants of the championship showed great enthusiasm that was acknowledged by Tournament Director, Abdul Qadir Siddiqui, in the welcome address.

The legendary Mohammad Yousuf, the only World and Asian champion to be produced by the country, was highly appreciative of the efforts being made at the resort for the promotion of cue sports. Cash awards of Rs 5,000 each were presented, alongwith trophies, gifts and certificates, to the winners of all the four events.