The top functionary of the National Bank of Pakistan (NBP) has pledged greater support for snooker in particular and sports in general as part of their policy of promoting healthy activities throughout the country. 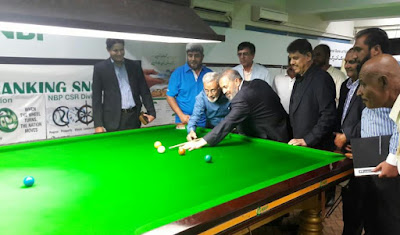 Saeed Ahmed, President and Chief Executive Officer (CEO) of the NBP, announced that their institution was looking forward to continue backing snooker as the cueists were bringing laurels for Pakistan.

Talking to the media corps, after inaugurating the 10th edition of NBP Ranking Snooker Championship 2018 at the NBP Sports Complex in Karachi on August 5, he expressed his delight with the improved performances of the Pakistani cueists at the regional as well as at the international level.

“It’s particularly pleasing to note that the performance level of the cueists has improved considerably after getting employment at our bank. Obviously the job security is a vital element and the cueists have been able to concentrate single-mindedly on their game instead of worrying for other things,” the NBP President reckoned.

He also commended the role of Iqbal Qasim, a cricket great, in having facilitated the promotion of various sports from the platform of NBP for decades.

“He (Iqbal Qasim) brings professionalism. He was a cricket star in his playing days and then turned out to be wonderful administrator as he headed our sports division so successfully over the years. We have welcomed him back wholeheartedly at the same position and he’s delivering again,” the NBP President acknowledged.

The President of the Pakistan Billiards and Snooker Association (PBSA), Munawwar Hussain Shaikh, in his brief remarks on the occasion, complimented NBP for being the only department to have supported snooker consistently.

“Besides sponsoring and hosting a national ranking snooker tournament every year for the past one decade, NBP has also provided jobs to more than half a dozen cueists which has helped tremendously in boosting cue sports all over the country,” the PBSA President recognized.

The chief of the NBP Sports Division, Iqbal Qasim, gave the assurance to the participating cueists that better arrangements would be made for them in the future with the expansion of the complex.

Shaukat Mahmood Khatak, Executive Vice President, NBP, added that more facilities would be added at the sports complex in due course of time.
readmore »»