Another duel between Shahid Afridi and Ijaz Butt culminates tamely

It wasn’t a dispute between the Chairman of the Pakistan Cricket Board (PCB) and a former captain of the national team. It was rather yet another duel between two key personalities who showed muscles before succumbing to the different pressures and opting for a peaceful settlement in the end. 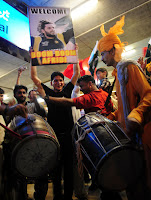 Both these characters have done Pakistan cricket more harm than doing good. The problem is that they engage the whole nation with their adventures. The temperament of both these gentlemen, Ijaz Butt and Shahid Afridi, overshadows their respective talents. We have just seen a new episode.

There’s something in common as well between these two. They take pride being in the news for the wrong reasons. Their modus operandi might be a little different but the same could not be said about their motives. They desire continue doing things as they please.

Ijaz Butt is a man of many moods. It’s simply the misfortune of the country that he has been assigned to look after the cricket affairs of the country. The powers that be are just not interested to take note of his wrongdoings. In fact he appears to have been granted the license to operate in the manner he desires, ignoring all norms or practices.

Nobody in the government has the time or interest to confront him. He is considered above the law, enjoying the absolute authority. He is not accountable for any act of his, irrespective of the damage caused to the national interest.

When the Chairman of the PCB could take everyone for ride, why not the captain of the team who has certain powers within his own right? Shahid Afridi has certainly lost favour as well as captaincy of late but he has his own men in the corridors of power.

Shahid Afridi could never be taken for granted. Aware of the fact that merit was not the criterion for extending his tenure as captain he probably went overboard on a few occasions to offend Ijaz Butt who used his powers to remove him as ODI captain.

Shahid Afridi didn’t accept the verdict gracefully and announced his retirement from international cricket. He skipped the tour of Ireland where Pakistan won both the games in his absence.

The gulf between the two kept widening and it became a political battle whereby both sides left no stone unturned in mobilizing their resources to continue making headline news. Shahid Afridi returned home to a kind of reception as if an exiled leader was making a comeback.

Ijaz Butt did not take the criticism lightly either. He initiated disciplinary action against the former captain who was not prepared to defend either. The matter went to the court.

Then the anti-climax followed. A meeting was held between the two in Islamabad the other day and Shahid Afridi reportedly agreed to withdraw the petition. He is now likely to be issued the No-Objection Certificate (NOC) by Ijaz Butt very soon thus clearing the way for him to play for Hampshire.

"The petition has been withdrawn as a part of the reconciliation between both sides. If the petition has borne fruit then there is no objection or obstacle in withdrawing a petition,” Syed Ali Zafar, Shahid Afridi's lawyer, was quoted as saying.

"We hope that the NOC will now be granted. The disciplinary committee hearing will be a kind of formality now,” he reckoned.
readmore »»