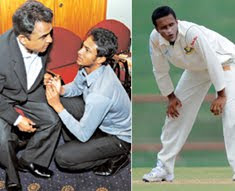 The skipper of the Bangladesh cricket team, Shakib Al Hasan, and the President of the Bangladesh Cricket Board (BCB), A H M Mustafa Kamal, have been in the news lately for the wrong reasons. Both of them appeared to be guilty of going overboard in a ceremony recently that was actually being held to celebrate their cricketing triumph.

It’s so easy to get carried away when provoked and you need depth of character to absorb remarks or comments that are not to liking. Both these gentlemen were found wanting in conducting themselves and their acts caused embarrassment instead in the hour of glory.

At the function organized to felicitate the team for its triumphs against the West Indies and Zimbabwe last year, BCB chief AHM Mustafa Kamal, should have avoided bitterly criticizing his team for losing the first Test of the ongoing home series against India. He didn’t have a point in questioning the commitment and sense of responsibility of the players after Bangladesh lost in Chittagong.

"You have to be more responsible and have to give your best. As a professional, I always want hundred per cent from the players and you have to be habituated with triumph and it will be not acceptable if you go down one day after winning a match the previous day," he was quoted as saying.

It was really unfair of the Board chief to have raised the issue in the ceremony even if he felt let down by the team. In any case his criticism looked totally unjustified. If he considered Bangladesh’s performance in the first Test as dismal or below par then I am afraid he needs to some crash courses on understanding the game.

Probably the BCB President was unaware of the fact that India are the top ranked Test side in the world and their batting line-up is hailed as one of the greatest of all-time. If the Bangladesh bowlers succeeded in routing them for less than 250 in their first innings they needed to be applauded not criticized. Then they very nearly equaled India’s first innings total.

The BCB President should have looked at the positives from the first Test rather than humiliating his players for losing the game in the final session.

Then the young Bangladesh skipper, Shakib-ul-Hasan, could not control his emotions and gave a befitting reply to the Board President by saying: 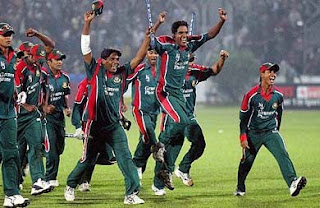 "No cricketer plays for defeat and we always try to give our best in the field. In order to get consistent success both players and the coaches should work together, no one can win on his own. Everyone should speak responsibly and assist us in our job. We will not win everyday, no one does. But our integrity should not be questioned.”

The BCB President had committed the first mistake and the Bangladesh skipper made the second mistake by taking on the former. Two wrongs don’t make one right. Shakib should have absorbed the remarks of the Board chief in the sporting spirit.

It didn’t stop there. A local newspaper, Kaler Kantho, posted a picture of Shakib kneeling in front of Mustafa Kamal after the function, reportedly to apologize for the comments. It was also reported that Shakib was also threatened with dire consequences by the BCB. readmore »»