Debutant Hamza Akbar created a sensation by winning the recently concluded Jubilee Insurance 38th National Snooker Championship 2013 at the Karachi Gymkhana’s Billiards Hall. The teenager from Faisalabad, making his debut in the National Championship, blew the whistle on quite a few seasoned cueists to clinch the title against all odds. 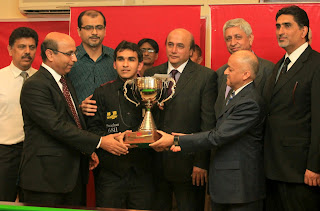 Both the guests of honour thoroughly enjoyed the epic final and they wholeheartedly congratulated both the finalists for coming up with awesome performance. Alamgir Anwar Shaikh, President, Pakistan Billiards & Snooker Federation (PBSF), delivered the welcome address in which he acknowledged the contribution of all stakeholders in making the event a success.

Homi Khambata, President, Karachi Gymkhana, himself an enthusiastic cueist, described the final a memorable one and looked forward to hosting many snooker events in the future.

“Obviously I am feeling thrilled at my accomplishment. I had done well in the junior circuit earlier but this performance at the senior level makes me happy beyond words. This is the fulfillment of one my dreams,” Hamza observed after being crowned as the new national champion at the age of 19.

“Mohammad Asif, who won the World Snooker Championship a few months ago, has been my role model. We belong to the same city (Faisalabad) and we have been playing at the same club there for the past couple of years. I have derived a lot of inspiration from him,” the dashing youngster disclosed.

“Although I had defeated experienced rivals in the earlier games the final presented a tougher challenge and I just took it frame by frame. Thankfully my game worked and I was able to beat my rival who was far more experienced than me,” Hamza added.

The 37-year-old Imran, hailing from Lahore, didn’t mince words in stating he lost to a cueist who played better than him in the final. The vastly experienced Imran, who didn’t lose any of his earlier games in the competition, regretted not having the most of his purple patch to win the national championship.

“I have won quite a few national ranking tournaments over the years but unfortunately I have yet not clinched the national title, having gone down fighting in the final for the fourth time,” he remarked.
readmore »»