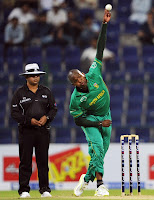 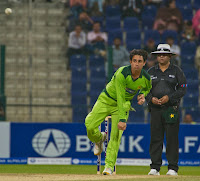 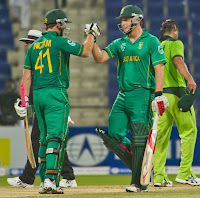 The 66-run fourth wicket partnership between Colin Ingram and JP Duminy brought the South Africans back in control and even the dismissal of the latter couldn’t change the course of the proceedings.
readmore »»

Brothers Mazhar Naqvi and Mustafa Naqvi came up with standout performance to guide the Karachi Club to title victory in the 50th Sindh Swimming Championship 2010 staged at the Karachi Gymkhana.

The Naqvi brothers displayed their brilliants skills at the Karachi Gymkhana Swimming Pool which brought to an end the 15-year-old dominance of the famous Habib Public School.

The teenaged Mazhar in particular was absolutely brilliant grabbing as many as seven gold medals. He emerged triumphant in 50, 100, 200 freestyle and 50,100, 200 meter in open category besides being a component of the winning 4x100 Relay medley relay. He was the unanimous choice for the award of the province's best men swimmer.

Mazhar, who also broke a few long-standing records, was easily the most versatile all-round swimmer in the two-day gala and was adjudged the best swimmer in the open category. He broke as many as four records during the course of the championship held over the weekend.

"My first ambition is to win a gold medal in men nationals in freestyle and later desire to represent Pakistan in South Asian Games and Asian Games," Mazhar, a 17-year-old student of Lecole School of Advance Studies, remarked after his terrific performance.

He complimented his rival and friend Aneeq Anwar for his outstanding performances in the competition.

"We are desirous of improving the overall standard of Sindh province in swimming. We are also eager to make our presence felt in a big way at the national level,” Mazhar added.

Deriving inspiration from his elder brother, Mustafa stole the limelight in the Under-16 age category by grabbing as many as four gold and seven silver medals. He won the gold in 50, 100 meter butterfly 200 meter freestyle and 50-meter breast stroke.

Mazhar and Mustufa faced some challenge from the immensely talented Aneeq Anwar, who also displayed superb performance in open as well as Under-16 contest. Aneeq and Mustafa were jointly declared the best swimmer in U-16 competition.

Aneeq, a student of Defence Public School, pocketed five gold medals and as many silver medals to also emerge as one of the stars of the championship.

Karachi Club dominated the event as they accumulated 198 points to lead over 300 swimmers contest. Karachi Grammar School secured second position with an aggregate of 167 points pushing the holders Habib Pubic School to the third position with a tally of 139 points.

Mazhar Naqvi (Open), Aneeq Anwar and Mustufa Naqvi (U-16), Saad Amin (U-12), Muhammad Bilal Qasim (U-14), Reza Munir (U-10) and Mirshah Pasha (U-8) were declared as the best swimmers in their respective categories.

Member National Assembly and famous television personality, Khushbakhat Shujaat, was the chief guest in the presentation ceremony and she distributed medals and trophies among the outstanding performers.

The President of the Karachi Gymkhana, Younus Rizwani, was also present on the occasion alongwith the top officials of the Sindh Swimming Association, Shahbaz Qureshi and Mohammad Ali Shishmahal.