It was one tour which every member of the Indian team, originally in the squad or summoned there as a replacement, would like to forget quickly. It was the most nightmarish of all their outings in the recent past. It was the summer, not much different in terms of results, to the ones of 1959 and 1974 when they had been whitewashed in England.

It would certainly be unfair to hold the Indian Premier League (IPL) wholly and solely responsible to the recent debacle. There were a few other factors as well, beyond the much-criticized Board of Control for Cricket in India (BCCI) which contributed to the downfall of the Indians on a tour where literally each and every thing went against them right from the first day of the tour to the very last day.

India’s solitary warm-up match before the first Test at Lord’s was hit by weather, limiting their practicing opportunity. Rains kept chasing them at the wrong time throughout the ill-fated tour. Even in their final outing where they posted a massive total, rains intervened to ensure England didn’t need an arduous task of overhauling 300-plus target at Sophia Gardens in Cardiff.

This could lead one to believe that it was a very wet summer. If that was the case how did India lose all the four Test matches?

It’s not often that the spin of the coin follows the same trajectory on successive days. India lost all the tosses in the limited overs games and batted first on all occasions. Almost every time their batsmen put runs on the board in bowler-friendly conditions. Yet that side was blanked in all games quite extraordinary to say the least. 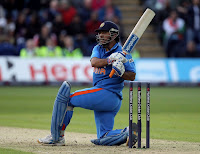 Whenever and wherever India scored heavily and then stuck early blows the rains arrived to rescue England. The Indian bowlers and fielders put up brave show in conditions when the late evening dew made it exceedingly hard to grip the ball. They could have only tried their level best which they did. But they didn’t possess the awesome power to win a game.

England must be wondering if their side was good enough to win all eight matches that produced results. Their fringe players, having struggled in the past and likely to do the same in future, came up with performance of lifetime. The ordinary mortals became champions, outshining the seasoned campaigners in the opposing team.

Injuries are part and parcel of modern day game but you can never expect the top eight players getting sidelined. The Indian team has had the tendency of falling apart whenever their heavyweights are missing. They were severely jolted by the absence of the star performers and they didn’t have the luck to escape punishment. 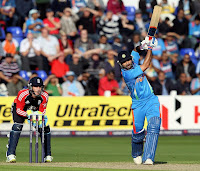 Who would have imagined India, having been crowned as the world champions only a few months ago, would return from England empty-handed? Who could have thought of the top-ranked Test side for the last three years getting whacked in every game?

Probably the only saving grace for India was the ‘safe’ return of skipper Mahendra Singh Dhoni, who braved everything with a smile on his face until the final day. He may not have scored the quantum of runs expected of his blade but there was hardly anything to complain about his captaincy with the limited arsenal at his disposal. That he kept himself fit, physically and mentally, throughout the tour spoke volumes of his mental toughness.
readmore »»