The acting Australian captain Michael Clarke led by example and his brilliant unbeaten century powered his team to an emphatic eight-wicket win in the fourth One-day International against Pakistan at the Sheikh Zayed Stadium in Abu Dhabi. 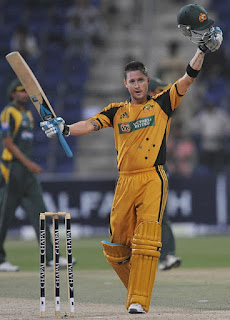 The victory in the fourth ODI also enabled the Aussies to clinch the series with a game to spare. They should be a relieved side now, after having been shaken in the first outing. They have taken their time to acclimatize and by the look of things they have done it much better than their opponents.

The Australians have lifted their game after the debacle in the opening fixture where a horrible batting collapse cost them the match. They were not all that convincing though in the following games but one could sense their key players taking the responsibilities.

Clarke, who has been entrusted with the task of leading the team in the absence of Ricky Ponting, has done a fantastic job. He couldn’t get going in the first game but he has applied himself and led by example.

It’s always very important for the captain to deliver. It’s more so when you are leading a young side. Clarke had to rise to the occasion to motivate his boys, the majority of whom lacked international experience.

Australia were in dire straits even while chasing a modest target of 198 when Shoaib Akhtar removed Brad Haddin and Marcus North very early to make them three for two. The skipper walked in to join Shane Watson with his team under pressure once more.
While Watson struggled to get on top of the bowling it was Clarke who made a statement by going hard at the loose balls. Their unbroken 197-run partnership for the third wicket closed all escape routes for Pakistan.

Clarke completed his well deserved century with an imperious drive off Shoaib Akhtar who looked ordinary in his last few overs. It was the best knock of the Australian skipper in the series in which he has delivered consistently. He looked in complete control while playing the aggressive shots and even Watson grew in confidence in the company of his captain.

Watson, although finished unbeaten on 85 off 140 balls, needs to improve his technique against the slow bowlers if he has to retain his place in the side for a long time. He will have to find a way out to tackle the spinners. 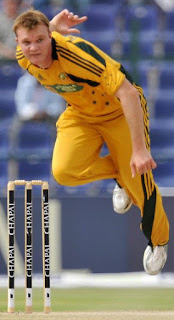 It was basically his inability to come to terms with the slow bowlers that put his captain in a spot of bother occasionally. An attacking team like Australia is not expected to get bogged down against any quality of bowling and it was shocking to find Watson playing so loosely against the likes of Saeed Ajmal.

While the spotlight was stolen by Clarke and Watson with their match-winning partnership, the victory was set up the left-arm quickie Doug Bollinger whose five-wicket haul sent Pakistan crashing to 197 all out.

There were stages in the Pakistan innings where they threatened a much bigger total but the Australians were rewarded for trusting their fast bowlers who kept on taking wickets to contain the rate of scoring.