For the last many years the Sri Lankans have been much stronger outfit in the cricket field than Pakistan but the story has changed dramatically when these two nations were engaged in a combat. 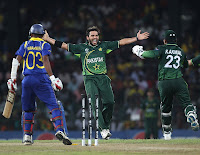 In fact it would be unfair to call it a battle or a combat because these two countries hardly ever appear to be taking on each other with the attitude of a rival. It’s more of a friendly atmosphere whenever they come across each other.

The Sri Lankans have had a history of failing against Pakistan and they continue doing it, purposely or otherwise is anybody’s guess. May be it is sheer coincidence but having lost eight of the nine games in a global event makes people realize that there’s something missing when taking on Pakistan.

History repeated itself at R Premadasa Stadium in Colombo on February 26 as Pakistan surprised even their own die-hard supporters by whipping Sri Lanka, one of the favourites to lift the trophy, in their crunch Group A game of the Cricket World Cup 2011. 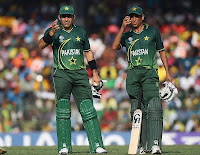 People have their reasons of assessing the situation but I had ‘declared' as early as the opening overs of the Pakistan innings that Sri Lanka would not be winning this game. The so many experts around me kept arguing and they were unwilling to accept my verdict.

Nobody was ready to accept the fact that Sri Lanka, with so many batting stalwarts in their ranks, will not be able to chase down a target of 278 in 50 overs on the easiest paced track with the dew factor also on their side. My reply was simple. They could do it in 40 overs only if they so desire.

I am neither a fortune-teller nor an astrologer. Betting is not my cup of tea yet. I was being offered to place a bet when I had so emphatically and loudly started asserting that Pakistan were going to win the match.

Well let me share it with my readers and friends, particularly those who were reluctant to foresee a struggling Pakistan line-up overcome a formidable Sri Lankan side in their own den, that I had based my assessment on the basis of the chemistry as well as the history between the two teams.

The manner in which the Pakistani batsmen had a go at the Sri Lankan bowlers from the outset and the way in which Younis Khan in particular was allowed to bat had left very little doubt in my mind about the outcome of the game.

The poor Sri Lankan fans kept cheering their team at the ground until the last over but to me they were just innocent people oblivious of so many facts that determine the course of the game.

Mind you it was Sri Lanka’s first-ever defeat in a World Cup match at home. But don’t forget it was their first outing against Pakistan as well.

I don’t wish to go into the details but historically the Sri Lankans have had this habit of losing the intensity and focus when facing Pakistan. It had all started in the inaugural World Cup in 1975.

Sri Lanka, still an Associate member of the ICC, had done wonders to challenge the mighty Australian bowling attack having the likes of Jeff Thomson and Dennis Lillee. But they fell like novices in their very next game against Pakistan.

Sri Lanka had helped the Pakistan cause immensely by their twin defeats in the league matches of the 1983 as well as the 1987 World Cup. Pakistan forced Sri Lanka to submission in 1992 again on course of winning the title.

It was Sri Lanka’s turn to clinch the title in 1996 when they didn’t need to clash with Pakistan. The Sri Lankans made it to the final again in 2007 when Pakistan was eliminated early.