17th National Seniors Cup off to a cracking start


On a day when South Africa’s skipper A B de Villiers smashed the fastest century in One-day International at Johannesburg there were a few blazing knocks also on the opening day of the 17th National Seniors Cup Cricket Tournament 2015, being organized by the Pakistan Veterans Cricket Association (PVCA). 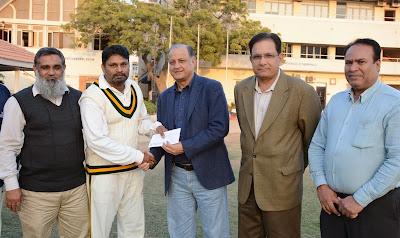 A record number of 109 teams from all over the country have entered the tournament which was inaugurated by Nadeem Omar, Managing Director, Omar Associates (Pvt) Ltd, at the Karachi Gymkhana Cricket Ground on January 18.

Kamran Hussain’s sensational 36-ball 65, containing one six and seven fours allowed Karachi Gymkhana to post a commanding total of 205 for five in 22 overs after the foundation was laid by Mazhar Ali (50 off 36 balls) and Fayyaz Abbas (41 off 34 balls). Medium-pacer Javed Ali (3-39) was the pick of the bowlers.

Karachi A A Pakwan, in reply, crashed to 55 for six before being bowled out for 140 in 19.3 overs despite fighting knocks from Irfanullah (46 off 41 balls) and Mairaj-ul-Haq (40 off 30 balls). The top-order was rocked by medium-pacers Shakeel Ahmed (3-23) and Kamran Hussain (2-15) while leg-spinner Murtaza Habib (2-8) finished the job. Kamran Hussain of Karachi Gymkhana was declared Man of the Match for his fine all-round performance.

It was another Kamran Hussain who played the pivotal role in guiding Karachi Gold Bridge to victory over Karachi Airport. He earned the distinction of scoring the first century of the competition and he blasted 114 off 66 balls with the help of 21 boundaries which enabled Karachi Gold Bridge to reach a total of 222 for six in 22 overs. Medium-pacer Sagheer Abbas (2-41) and left-arm spinner Ali Akbar (2-50) were the most successful bowlers in their innings.

Opener Nazim Wahab, adjudged Man of the Match, blasted four sixes and fours in his blazing knock of 78 from only 58 balls while Ashar Ali whacked seven sixes and two four in his rollicking 69 off 36 balls which powered Combined XI to an impressive total of 213 for four in the stipulated 22 overs.

Chasing a formidable total, Quetta Veterans could not recover after losing early wickets and they were later tormented by leg-spinner Sohail Ahsan (4-33). They finished at 141 for six with Raju Gulfam (45 off 45 balls) being their top scorer.
readmore »»