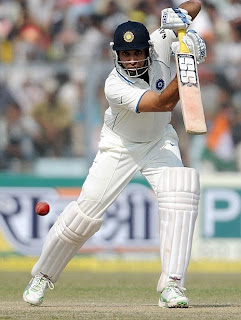 What a joy it is to watch VVS Laxman bat! His stroke-play is truly poetry in motion. He is a pure artist. He has been the most elegant batsman in the game for quite sometime now.

He hasn’t lost any of his touch as we witnessed it at the Eden Garden in Kolkata where he plundered his first Test century against South Africa. It was a magnificent knock that delighted his large number of fans at what has been his favourite ground.

It’s not mere coincidence that he has completed 1,000 runs in just nine Tests at the Eden Gardens. He has played a few of the most memorable knocks of his career here with the epic 281 against Australia in 2001 being the standout effort.

India had missed him so much in the previous game in which he couldn’t take part due to injury. His return to the side immensely bolstered the batting line-up that had cracked at Nagpur primarily due to inexperience that had allowed the South African bowlers to get on top of them.

There was plenty of buzz with Laxman coming back into the side in the second Test that India needed to win in order to retain their top ranking. More significantly they also had to prove the point that the odd failure in the Nagpur Test was more due to the non-presence of their stalwarts than any other factor.

There was greater pressure on Laxman to deliver because Rahul Dravid and Yuvraj Singh were still unavailable and he had to fill the vacuum with the likes of Virender Sehwag, Gautam Gambhir, Sachin Tendulkar and Mahendra Singh Dhoni.

There were suggestions to promote Laxman to the number three position in the absence of Dravid, having made the one down position his own for a number of years now.

John Wright, the former Indian coach, firmly believed that sending Laxman at number three would help the cause of the team immensely. After all he and skipper Sourav Ganguly were instrumental in sending him up the order when the team was in dire straits at the same venue against the mighty Aussies nine years ago.

It had proved to be a master stroke with the Hyderabad touch artist rewriting history with a colossal knock of 281 that led the turnaround and India went on to win the Test match from the brink of disaster. 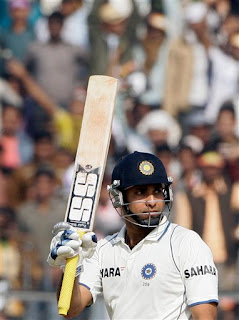 The present Indian think-tank, however, had different ideas and they probably had the conviction that Laxman was to come good at any position. They were proved right.
Murali Vijay, not surprisingly, failed again at number three but by holding Laxman back they had ensured that there was not a big hole in the middle-order. The tactics worked very well once more.

India had very nearly surrendered the initiative by losing three quick wickets in the closing stages of the second day’s play and South Africa were very much in the game at the start of the third day’s proceedings.

It was Laxman’s fluency that tormented the charged up bowlers and their shoulders dropped when the balls were dispatched merrily to every part of the ground. Dhoni kept his company all the way and together they built a magnificent partnership that entertained the big crowd and consolidated India’s position. readmore »» 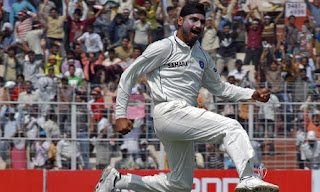 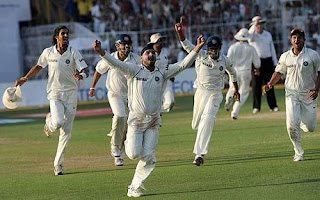 Well India just managed to take the last wicket that helped them win the Test, level the series and retain the number one rank. Dhoni was obviously a very relieved man when Harbhajan took the final wicket with barely a few minutes play remaining. readmore »»