Posted by Syed Khalid Mahmood at 9:13 AM .
1 comments
Labels: Ind vs NZ

100th Article on this Blog

India managed to overcome the inconsistent weather and the unpredictable hosts at the Seddon Park in Hamilton to record their maiden win in a series of One-day Internationals in New Zealand. 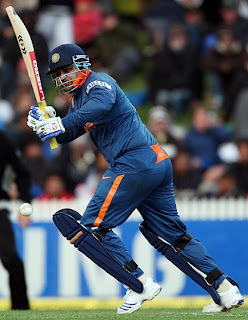 As on so many occasions in the past, India had to keep an eye on the external factors besides controlling the game in the field. They had been defeated by the weather in the second game after having dictated terms in whatever cricket that could be played.

Well there’s no doubt in one’s mind about this Indian side being far too superior to the hosts, who continue making life more miserable for themselves by sticking to their policy of fielding uncapped players.

The current Indian outfit hardly has any faults therefore it’s extremely unlikely to be floored and that too by an inexperienced and unsettled combination like the New Zealanders have at the moment.

The Indians, after having been scared for a few moments in the previous ODI where they just lost the focus for no rhyme or reason while defending a mammoth total, didn’t commit that many mistakes and their victory march was only threatened by rains.

Virender Sehwag batted in the same manner as he has done throughout his career. This charismatic opener is mentally so strong that he’s not afraid of the reputation of the bowlers or the state of the pitch. He has only one word in his vocabulary. That is to dominate from the moment he sets his feet on the ground.

Sehwag is so immensely gifted that he rarely has to change the gears. If the ball lands in his zone he will go for it. His hand-eye coordination is exemplary and there is no more exciting sight in world cricket than watching him on song. He toys with the bowling literally every time he goes out with the bat in his hand.

No record appears out of his reach when he is on song. The New Zealanders can only hope that he himself would commit mistake early in his innings otherwise they should be prepared for another hammering in the field.

There is no element of surprise in watching him post India's fastest ODI hundred reaching the magical three figures off only 60 balls. If anybody has the capacity and the talent to break Shahid Afridi’s world record of fastest hundred it’s Sehwag.

His opening partner Gautam Gambhir also contributed his bit in the unbeaten double century stand that broke all hopes the hosts had of making a match of it even with the D/L system. 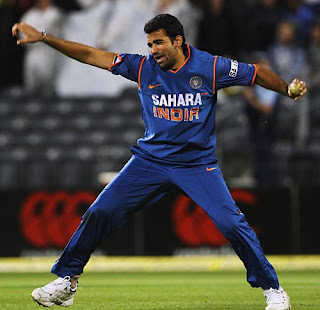 Earlier in the day New Zealand got off to a decent start once again through the opening pair of Jesse Ryder and Brendon McCullum but the rate of scoring dipped with the arrival of the spinners.

Yuvraj Singh and Yousuf Pathan offered little width to the batsmen who got frustrated and threw away their wickets. Harbhajan Singh was also very economical in his earlier overs and New Zealand had to take the batting powerplay earlier than anticipated to lift the tempo.

The move backfired as the pace duo of Zaheer Khan and Ishant Sharma were bang on target and their wicket-taking abilities allowed India to gain control. It was a wonderful exhibition of quality fast bowling from both ends.

India, however, had to pay dearly for the let off to Peter McGlashan, who was dropped first ball by Mahendra Singh Dhoni off Ishant Sharma. He rode his luck as did Grant Elliott as they somehow gathered 95 runs off the last 10 overs.