Fahad Academy and Kamran Public School cruised into the semifinals of the HBL Inter-Schools Cricket Tournament 2014, being organized by the Pakistan Veterans Cricket Association (PVCA), by taming their respective rivals in the quarter-finals. 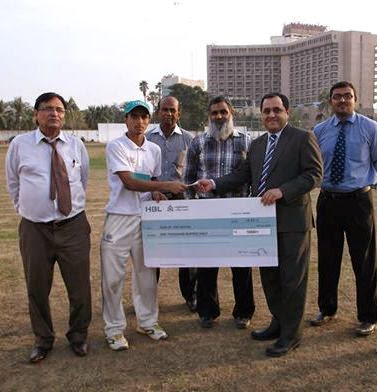 Electing to bat first, after calling correctly, Fahad Academy posted a total of 229 for nine in the allotted 40 overs. Then they bowled out their opponents for 158 in 36.5 overs to win the match comprehensively.

Zafar Mandani and Tauseef Khan revived Fahad Academy with useful knocks. Zafar remained undefeated on 56 off 59 balls after Tauseef was dismissed for 43 off 59 balls. They allowed their team to reach a fighting score of 229.

Set to score 230 in 40 overs, HBL Schoolboys Greens lost three early wickets. The 61-run fourth wicket stand between opener Syed Amin (36 off 63 balls) and Nadir Awan (42 off 48 balls) brought them back into contention but another collapse saw them lose their last seven wickets for 48 runs.

Left-arm spinner Arsalan Shah (3-41) was the pick of the Fahad Academy bowlers but his teammate Zafar Mandani was adjudged Man of the Match for his unbeaten half century.

In the other quarter-final, Khan Secondary School, who batted first after winning the toss, was spun out for 125 in 32.5 overs by Kamran Public School who raced to the target of 126 in just 12.2 overs.

Set a modest target of 126 in 40 overs, Kamran Public School went after the bowling from the start of their innings. The tone was set by the skipper himself as Ammad Alam, who opened the innings, hammered 22 off 11 balls.

The momentum was sustained by number three Hasan Mohsin who smashed 11 boundaries in his whirlwind 60 off 37 balls. S M Hasnain remained undefeated on 27 off 20 balls with the help of four boundaries as the winning runs came in only the 13th over. The Man of the Match award, however, was picked up by off-spinner Mohammad Bin Junaid for his four-wicket haul.
readmore »»