It was not very long ago when the Australians were busy in thrashing one opponent after another in nearly every format of the game. They were slow starters to some extent in the latest version, Twenty20 Internationals, but their overall dominance in international cricket was legendary. 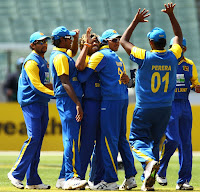 Well now it’s the other way round for the Aussies. Their losing streak has been extending and there’s very little to suggest if it will stop. The manner in which they lost the first One-day International against Sri Lanka at the Melbourne Cricket Ground (MCG) on November 3 their think-tank must have got worried and they need to do something to arrest the decline.

Australia appeared to be in total control when they had reduced the visitors to 107 for eight while defending a total of 239. Little idea they had that the game would be snatched from such a commanding position.

The world record ninth wicket stand between Angelo Matthews and Lasith Malinga thrilled the huge number of Sri Lankan supporters at the MCG but it shattered the Aussies, already running short of confidence due to string of defeats.

Mathews and Malinga eclipsed the long standing record of Kapil Dev and Syed Kirmani who had rescued India from a similarly precarious position in the game against Zimbabwe during the 1983 World Cup.

Comparing the two huge ninth wicket stands, the one between Mathews and Malinga was more unlikely. While both Kapil Dev and Kirmani were recognized batsmen they also were pitted against an inexperienced team which was yet to be allotted the full membership of the International Cricket Council (ICC).

No disrespect meant to the accomplishment of Kapil Dev and Kirmani but they had put together what indeed had turned out to be the match winning partnership while batting first.

The situation was comparatively more tense when Malinga, a fast bowler not possessing batting credentials, walked in to join Mathews, a promising all-rounder but nowhere near to the class of the great Kapil Dev yet

It was incredible how Mathews and Malinga turned it around against the Aussies at the MCG, the venue of many of their historic conquests. The Sri Lankans have had very poor record in Australia before the start of the current tour and one thought they had run out of steam once more when the two got together.

Their 132-run partnership was not broken until the scores had been tied and Australia’s chances of winning the game had been blown away. Malinga, having blasted his maiden ODI half-century, was short of the crease when attempting what would have been the winning run.

It was Sri Lanka’s good luck that a man as vastly experienced as Muttiah Muralitharan, no rabbit with the bat, walked in at number 11 and he completed the job in style with the assured Mathews at the other end.

The Sri Lankan victory overshadowed the impressive international debut of left-arm spinner Xavier Doherty who claimed four wickets to bring Australia back in the game after Kumar Sangakkara and Mahela Jayawardene had threatened to make it a one-sided contest.

Australia’s innings was rocked by Thisara Perera whose five-wicket haul limited the hosts to 239 despite the recovery led by the ever-dependable Michael Hussey who remained undefeated with 71 containing just one boundary and as many as 50 singles.
readmore »»