Omar Cricket Club extended its sensational form to retain the title by edging out Advance Telecom by two runs in thrilling final of the 2nd Peace Cup T-20 Night Cricket Tournament 2014 at the picturesque Naya Nazimabad Lawai Stadium on July 27. 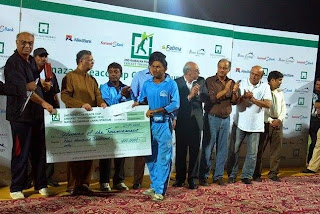 So it has become two in two for the rampaging Omar CC side as they had also emerged triumphant in the inaugural edition of the tournament held at the same venue last year.

Set a daunting target of 172 in 20 overs, Advance Telecom needed eight off the last six deliveries. Off-spinner Misbah Khan kept his cool and delivered a fantastic final over which yielded only five runs. He finished with the excellent figures of two for 28 in the high-scoring game.

Advance Telecom was restricted to 171 for eight despite Babar Agha, who hammered two sixes and half a dozen fours in brilliant knock of 59 off 47 balls and Asif Ali, who made 55 off 26 balls with the help of six sixes and four fours.

Omar CC was indebted to former Pakistan fast bowler Mohammad Sami who first boosted the total by blasting an unbeaten 59 off 34 balls with three sixes and two fours and later chipped in with two wickets for 17 runs to clinch the Man of the Match award.

Omar CC installed a big total of 173 for seven in the allotted 20 overs. Prolific opener Rameez Raja gave the innings head start by striking seven sixes and eight boundaries in his splendid innings of 80 off just 44 balls. Fast bowler Sohail Khan (2-38) and leg-spinner Faizan Riaz (2-28) pulled it pack for Advance Telecom before the final onslaught from Mohammad Sami.

The prize distribution ceremony was held soon after the conclusion of the final in which trophies and cash awards were given away by Adil Siddiqui, Advisor to Sindh Chief Minster, Arif Habib, Chairman Arif Habib Group, Nadeem Omar, Managing Director, Omar Associates, and Mohammad Iqbal, Director Sports, Naya Nazimabad.

The Omar CC skipper, Javed Mansoor, collected the winners trophy with a purse of Rs four lacs while the Advance Telecom captain, Rehan Sheikh, received the runners-up trophy with a cash award of Rs two lacs.

Among the individual prizes, Saud Shakil of Alamgir Gymkhana was declared Man of the Tournament while Rameez Raja, Fawad Khan and Javed Mansoor, all of them from Omar CC, were adjudged the best batsman, the best bowler and the best wicketkeeper of the tournament respectively.
readmore »»


The all-conquering Omar Cricket Club have created an unusual and unexpected situation. By qualifying for the finals of all the major cricket tournaments being held in Karachi during the month of Ramazan they have put the organizers in a spot of bother.

Since all the finals of the month-long events were scheduled to be held around same dates, it became practically impossible for them to make an appearance in all of them simultaneously. It has led to the postponement of the final of the 3rd Vital Five T-20 Ramazan Festival Tournament 2014 which will now be staged at the DHA Vital Five Cricket Academy Ground soon after Eid holidays. Omar CC’s opponents in the final will be Y J XI.

“We have been prompted to reschedule the final, originally planned to be held on July 27, due to the engagement of one of our finalists as well as the defending champions, Omar CC, in other tournament finals. They won’t be available even on July 28, apparently the last available day of Ramazan, which has prompted us to postpone our final for a few days. New date will be announced with mutual consent of both of the finalists,” Tournament Director, Jalaluddin, a former Test fast bowler, announced.

Rameez, who picked up Advance Telecom Man of the Match award, blasted three sixes and seven fours in his stroke-filled 53 off 24 balls while Mohammad Sami (34 off 29 balls) and Saad Nasim (32 off 20 balls) also batted freely to enable Omar CC to reach the target in 18.1 overs despite fine spell from left-arm spinner Rashid Hanif (2-29).

Y J XI had sneaked into the final by taming Vital Five Academy by 18 runs in a low-scoring semifinal. Useful contributions from Ashraf Ali (38 off 32 balls), Wajid Ali (32 off 24 balls), Gohar Ali (25 off 18 balls) and Mohammad Irfan (20 off 15 balls) plus a breezy 15 off seven balls from Fahim Ahmed, declared Man of the Match, enabled Y J XI to reach a competitive total of 155 for seven in 20 overs despite fine bowling by left-arm spinner Mustafa Iqbal (2-33) and medium-pacer Waqar Anwar (2-37).

Vital Five Academy lost wickets at regular intervals against the quintet of left-arm spinners, led by Yaqzan Rajput (3-36) and Osama Basharat (2-19). Even a defiant knock from Faisal Mubashir (48 off 41 balls) could not revive them and they were restricted to 137 for nine in 20 overs to get eliminated from the competition.
readmore »»


Omar Cricket Club retained the title by edging out K-Electric by nine runs in the low-scoring final of the 29th edition of the Karachi Gymkhana Omar Associates Ramazan Festival Twenty20 Cricket Tournament 2014 at the KG Cricket Ground on July 27.

Batting first, Omar CC recovered to post a total of 145 for six in the allotted 20 overs with Sarfaraz Ahmed’s unbeaten 33 off 22 balls being the highest contribution. Anwar Ali played a little cameo of 25 off 15 balls while Hafiz Saad Nasim remaining undefeated on 23 off 10 balls and Khurram Manzoor making 21 off 20 balls.

Nadeem Omar, Managing Director, Omar Associates (Pvt) Ltd, who was the chief guest in the prize distribution ceremony held immediately after the conclusion of the final, presented a cheque of Rs five lacs to the winning captain, Adnan Kalim, while total cash awards of Rupees one million were disbursed on the occasion.

Asif Raza’s fine all-round performance had enabled the defending champions to storm into the final when outwitted Eaton Cricket Club by 32 runs in the rain-curtailed semifinal on July 25.

K-Electric had cruised into the final by having overwhelmed Advance Telecom by seven wickets in the other semifinal on July 26.

Put into bat, Advance Telecom struggled against the slow bowlers to reach a total of 133 for nine in 20 overs in which Sohail Khan (22 off 14 balls), Mohammad Yasin (21 off 20 balls) and Asif Ali (18 off 19 balls) contributed anything of note.

Off-spinners Shahid Khan (2-11) and Misbah Khan (2-30) were well supported by the quartet of Fawad Khan, Osama Basharat, Rizwan Khan and Saud Shakil, all of whom got a wicket each.

Opener Faraz Ali, adjudged Man of the Match, smashed a couple of sixes and seven boundaries in his 70 off 51 balls which allowed K-Electric to reach the target comfortably with 2.1 overs to spare. Off-spinner Nasir Owais (2-14) was the pick of the Advance Telecom bowlers.
readmore »»