The NBP Inter-Academies League Cricket Tournament is being held separately for the Under-16 and Under-19 outfits with four institutions taking part in the inaugural event.
The Head Coach of the Customs Cricket Academy and a former Test fast bowler, Jalaluddin, briefed the media about the salient features of the recently launched initiative at the NBP Sports Complex in Karachi on June 29. 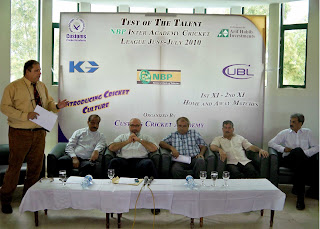 National Bank of Pakistan (NBP), United Bank Limited (UBL) and Pakistan Customs are the three participating departments while Karachi Gymkhana are the fourth team to have entered the event.
Jalaluddin revealed that both the Under-16 as well as the Under-19 tournaments will be organized on double league basis with each team getting to play a home and away match against every opponent.
In order to make the contests more interesting, he added, bonus batting and bowling points will be on offer for the various landmarks during the course of every game.
“The tournament will continue for the whole of July and the teams securing the highest points at the end of the league matches will be declared the winners. All the matches will be 40-overs-a-side contests with the fielding to bowl 15 overs an hour,” he said.

“The basic idea behind launching these contests is to promote club cricket in Karachi in real sense of the word. There is more club cricket in Karachi than any other city of Pakistan but the problem is that its quality is not of the desired class. We aim to bridge this gap by bringing in professional management to tap the raw talent,” Jalaluddin, who holds the record of registering the first hat-trick in One-day Internationals, remarked.

“This NBP Inter-Academies League Cricket Tournament will enable more than one hundred promising teenagers to display their talent. We will monitor their progress and shortlist the outstanding performers for further training and grooming,” he continued.
Jalaluddin explained that only those academies having a ground of their own were extended the invitation to take part in the tournament.
Former Test left-arm spinner and Head of the NBP sports department, Iqbal Qasim, reckoned that the tournament, being organized by the CCA, will go a long way in reviving club cricket besides raising the standard of the sport.
He stated that the expertise of the CCA will be greatly beneficial in accomplishing the objective. He felt that the tournaments like these help in creating a larger pool of young cricketers who get the opportunity to come into limelight at the strength of their performance.

The briefing was conducted by the tall off-spinner Haris Ahmed Khan, now one of the qualified coaches at the CCA.