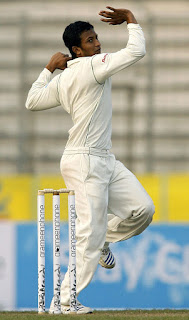 Not many people would have thought of the first Test between Bangladesh and Sri Lanka at the Shere Bangla National Stadium, Mirpur, entering the fifth and final day when the visitors had declared their second innings on the fourth morning setting an improbable target of 521.

The kind of cricket Bangladesh had mostly played after being pushed into the Test arena rather prematurely there was little to suggest the match going into the final day. Obviously you couldn’t have expected the team having folded for 178 in a matter of 60 overs in their first innings to do much better on a wearing pitch in their second outing.

Bangladesh surprised even their own supporters by their grit and determination in their second innings while chasing a monumental target of 521. Their top order batsmen played their natural game and they had every reason to feel delighted at having given the champion Sri Lankan bowlers a run for their money.

The hosts already had enhanced their reputation by having finished the fourth day at 254 for five, having negotiated 78 overs. Nobody expected them to go anywhere close to the target when the proceedings began on the final day but there was a hope that they might bat out the time to save the game.

Skipper Mohammad Ashraful and all-rounder Shakib Al Hasan picked up from where they had left the previous evening and by scoring freely they ensured that the pressure was also shifted on the heads of the Sri Lankan bowlers.

The home side was still 229 runs short of their target when Ashraful perished soon after having notched up another hundred. It must have been one of his greatest knocks in Test matches if not the best one.

Then came the brilliant century partnership between Shakib Al Hasan and Mushfiqur Rahim that really opened up the game and millions of cricket lovers all over the world became interested.

South Africa had only recently successfully chased down a target of 414 in Australia and who knew Bangladesh were on the verge of rewriting history. 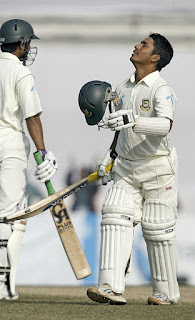 One knew that Murali Muritharan was capable of snaring the remaining four wickets in an over but the growing seventh wicket partnership made the contest much more absorbing than was being anticipated.

Not surprisingly Bangladesh did lose their last four wickets in a rush but not before having scared the mighty Sri Lankans. The hosts suffered a 107-run defeat but they had the satisfaction of going down fighting against a very tough opponent.

South Africa had emerged triumphant by scoring 414 in the fourth innings of the game at Perth but Bangladesh lost the encounter by 107 runs despite aggregating 413 at Mirpur. It was amazing performance by the home side and the resilience they have shown should do their confidence a world of good.

Scoring in the excess of 400 in the last innings of the game is an incredible accomplishment and the Bangladeshis should be complimented for having produced such an outstanding performance against all odds.

The magnificent batting performance by Bangladesh overshadowed another ten-wicket haul from Muttiah Muraitharan, who was chiefly responsible for preventing an embarrassing defeat for Sri Lanka.