History was rewritten at M A Chidambaram Stadium in Chennai on December 15 when India successfully chased down a target of 387 in the last session of the fifth and final day of the first Test against England. 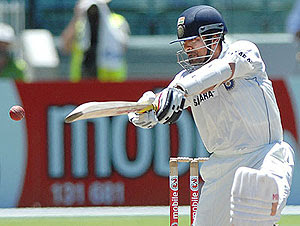 It was a day to remember for everyone watching the action. Sachin Tendulkar probably played the innings of his lifetime and Yuvraj Singh kept his company until the end as their 163-run unbroken fifth wicket stand allowed India to win the game very comfortably in the end.

The foundation for the successful chase was, however, laid by Virender Sehwag. His whirlwind knock of 83 on the fourth evening forced England in a defensive mindset. His onslaught from the outset did not allow the bowlers to settle down and with the century of the opening partnership raised in a jiffy there was all the time in the world to knock off the remaining runs.

The contribution of Sehwag’s partner, Gautam Gambhir, was equally important. His brilliant knock of 66 allowed India to recover from the losses of the belligerent Sehwag and the struggling Rahul Dravid.

By the time Gambhir lost his wicket, Tendulkar was well set and he took the responsibility of rebuilding the innings on his shoulders. VVS Laxman looked in sublime form before perishing early in the afternoon session.

The game was wide open when Yuvraj, making a comeback in the team, joining Tendulkar with 163 still needed in nearly two sessions. With quite a few balls misbehaving and the spinners extracting appreciable turn, batting was a tricky proposition if not a nightmare on the wearing fifth day pitch.

History was not on the Indian side either. They had made better starts while chasing larger totals only to fall short at the fag end quite a few times in the past. The big chase at The Oval in 1979 came into mind when India finished nine runs short while chasing a target of 438 after being 366 for one at one stage with the duo of Sunil Gavaskar and Dilip Vengsarkar in complete command of the situation.

Vengsarkar had spearheaded another memorable chase, against Pakistan at the Feroz Shah Kotla Ground, New Delhi in 1979, but the Indians couldn’t finish it off and settled for a draw. India had squandered golden opportunities at Chennai’s M A Chidambaram Stadium as well. Set a challenging target of 348 by Allan Border on the final day of the first Test in the 1986-87 series, the Indians appeared coasting towards a comfortable win after the good work of their top-order batsmen. But they lost their way against the unfancied Australian spinners and the end result was a tie.

Then in the first Test of the 1998-99 series against Pakistan, it was Sachin Tendulkar’s fighting hundred that brought India at a striking distance towards their target on the fifth and final day. But in one of the most dramatic turnarounds of all time India lost the match from a winning position.

Nothing of this sort happened at the M A Chidambaram Stadium on December 15, 2008 with the Indians finally able to press home the advantage. It was the fourth highest successful run chase in Test history and the highest ever on the Indian soil.
readmore »»