Bangladesh run out of luck against Pakistan as usual

One thing about the final of the otherwise maligned Asia Cup 2012 is certain. That it was not a fixed match, something which could not be said with conviction and certainity about some of the earlier games. 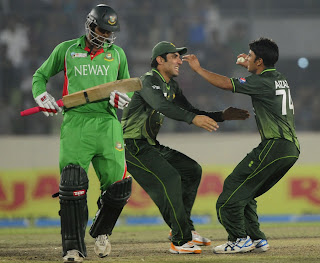 The final between hosts Bangladesh and Pakistan was a routine affair having predictable result with the latter emerging triumphant with the skin of their teeth. It was not unusual to find Pakistan being helped by the fringe members of their team.
Will you believe it that wicketkeeper Sarfaraz Ahmed, who was not being beinf played in the crunch games, turned out to be Pakistan’s topscorer? Equally awesome was the performance of fast bowler Aizaz Cheema, who wasn’t an automatic choice either.
But these are the norms in Pakistan cricket. Those least likely to do it in ordinary circumstances come up with something sensational to turn the tide decisively. They won the final by a couple of runs while defending a modest score of 236. 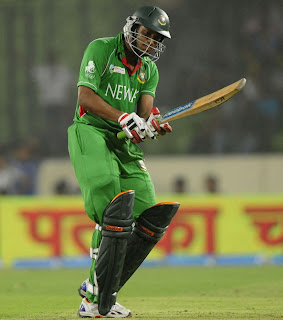 Bangladesh would have realized that defeating Pakistan, no matter how inexperienced or vulnerable they may look on paper, present the toghest challenge in the world. They may be good enough to overpower the World Cup finalists but they run out of steam in taking on the semifinalists.
It must not be often when Bangladesh control the game but fail to cross the line. But it happened two times and on both occasion Pakistan were their opponents. They had overtaken a much bigger total of 290 against the world champions but they crashed reaching a modest target of 237 in the final.
Whether they will curse that final over from Shahadat Hussain which went for 19 runs with the last pair in or they hold the others responsible for it, Bangladesh had reasons to feel deprived of their maiden title win.

At 170 for three, with Nasir Hossain and Shakib Al Hasan going great guns, Bangladesh appeared on course of a comfortable win. Only 67 more runs were needed in eight overs which looked a straighforward task for them considering the purple patch of their batsmen. 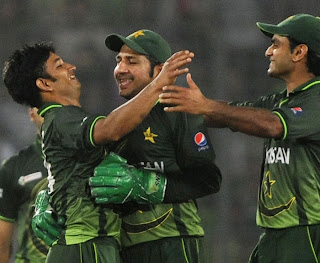 But as we have seen so many times in the past, Pakistan came back from nowhere to derail the home side which, only for the second time in the tournament, faltered from a position of strength.
It was being anticipated that they would not repeat their mistakes after having suffered a loss at the hands of Pakistan in their league fixture. But they proved everyone wrong by literally throwing the match away.
The kind of fortune Misbah-ul-Haq has been enjoying for the past few months it was going to be difficult to tame him but Bangladesh were expected to perform much better than they did in their first-ever appearance in a final.
Irrespective of the conditions in which they had registered thumping victories over India and Sri Lanka the momentum was with Bangladesh and they seemed to be having a balanced outfit to bring home their maiden title. They ran out of luck, more than out of steam, in the final.
readmore »»

Cricket suffers yet another major jolt in Asia Cup 2012

Cricket was once again disgraced out in the open during the Asia Cup 2012 when hosts Bangladesh marched into final after recording a comfortable victory over Sri Lanka in the last league fixture on March 20. The outcome was as much predictable as the body language and the efforts on the field of the two teams. 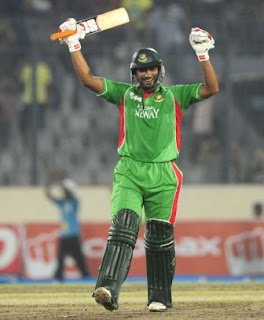 The equation was quite uncomplicated and straightforward. It was not rocket science. Bangladesh had to win and Sri Lanka had to lose in order to prevent defending champions India from reaching the final. A Bangladesh-Pakistan final was predicted before the start of the game and every thing went according to the plan. The Nature also didn’t come in the way.

Although India, who had emerged triumphant in the last edition of the Asia Cup before going on to win the World Cup less than a year ago, wouldn’t have mind exiting from the tournament because they accomplished everything else other than retaining the title.

India should be returning home satisfied having overpowered both their bitter rivals, Pakistan and Sri Lanka, besides having watched their record-breaking batsman Sachin Tendulkur fulfill his ambition of scoring 100th international ton. 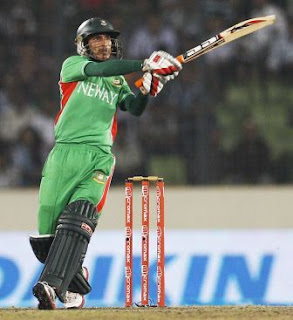 The Indian cricket authorities won’t feel embarassed for the above reacons but the cricket fans over there must have felt disheartened if not cheated by the shady deals that appeared to have taken place that marred the Bangladesh-India game.

In the prevailing circumstances every match in the Asia Cup is suspected of being fixed but there are two matches in particular where the emotions of a large number of people seemed to have been played with. It became apparent on so many occasions during the Bangladesh-Sri Lanka encounter that an engieered result was on the cards.

Bangladesh have rewritten their cricket history by advancing to the final of the Asia Cup for the first time. That they have done it in dubious manner, apparently with the support of the outside forces, certainly takes gloss out of their most awesome accomplishment yet.

They may even win the Asia Cup for the first time, since the event was launched in 1984. They would enter the final against Pakistan as underdogs despite their unexpected triumphs over India and Sri Lanka, the finalists of the last World Cup. 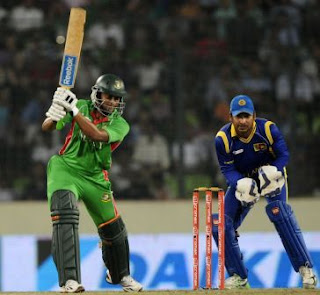 The kind of cricket that’s being played in the tournament and knowing the unpredictability and vulnerability of the Pakistanis in crunch games it should come as no real surprise if Bangladesh lift the trophy on March 22.

Interestingly betting and match-fixing were in the stage of infancy when the inaugural Asia Cup was staged in the United Arab Emirates (UAE) more than quarter of a century ago. Sharjah had just been inducted as a venue for One-day Internationals.

28 years down the road the mechanics of cricket have changed. In the past only just an odd game or two in years were feared to have been manipulated. It has become the other way round now. There are very few games that seem to remain unaffected of the outside forces. Let’s see how long cricket can endure this pain.
readmore »»