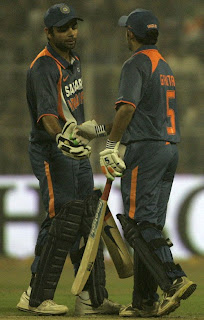 The Eden Garden in Kolkata has endured some of the most painful moments in India’s cricket history. It was at this ground where the hosts were knocked over against the run of play in the semifinals of the World Cup in 1996.

Sachin Tendulkar and Sanath Jayasuriya had played that game when the Indians, after having contained the rampaging Sri Lankans, were merrily coasting along until a sensational collapse had turned the tide in a most dramatic fashion.


There was no such drama when India successfully chased down a target of 316, doing it in a most emphatic manner at the same venue 13 years later. There were not that many people sitting at the ground to celebrate the massive victory that sealed the fate of the five-match series.

It were the boys from Delhi, Gautam Gambhir and Virat Kohli, who stole the limelight by scoring chanceless centuries. While it was the maiden ODI ton for Kohli, a former India Under-19 captain, the left-handed Gambhir achieved the feat for the seventh time in his career.

They were involved in a magnificent 224-run third wicket stand that adequately made up for the early exit of the celebrated duo of Virender Sehwag and Sachin Tendulkar. Their superb effort didn’t put to test the relatively inexperienced middle-order with Mahendra Singh Dhoni and Yuvraj Singh not playing the game for different reasons.

India did have a realistic chance of overtaking the highest ODI total at the Eden Gardens when Sehwag and Tendulkar came out amid thunderous applause. There was silience at the ground a few moments later when both of them perished inside four overs while trying to force Suranga Lakmal who was extracting unusual bounce off the wicket.

Sehwag was looking to extend his purple patch when undone by the one that hurried off the pitch while Tendulkar, also in sublime form, was caught at the edge of the 30-yard circle. He couldn’t keep his off-drive down and he had to pay the price.

Gambhir and Kohli didn’t waste much time in getting their eyes in and they were happy to deal in boundaries with the young Sri Lankan fast bowlers guilty of spraying the ball on both sides of the wicket.

The introduction of spinners applied the brakes as far as the rate of scoring was concerned as both the batsmen were not prepared to take risks. They kept rotating the strike at will and the asking rate was kept around run a ball all along.

They exploded only after reaching their centuries by which time the traget had come down to double digit. Kohli clipped one elgantly over deep mid wicket for the maximum but he was caught right on the fence at long on when he tried to loft a spinner. 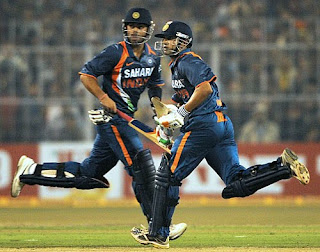 Dinesh Karthik was content in passing the strike to the well-set Gambhir who was in complete command of the situation. He brought up his 150 with the winning stroke with 11 deliveries still remaining.

Earlier in the afternoon Sri Lanka’s left-handed over Upul Tharanga had scored his first ODI century in 53 innings and more than three years that allowed his team to post a challenging total. Their cause, however, was helped once more by the fumbling fieldsmen.