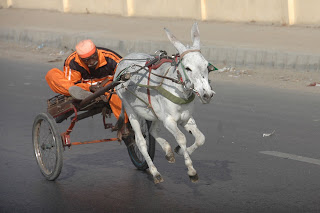 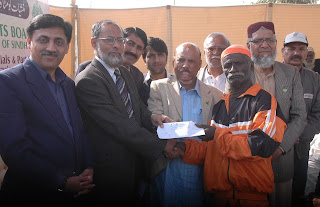 There are numerous donkey carts visible in the streets of Lyari town that serve a dual purpose. Besides being a mode of transportation it also provides them an avenue for recreation in the form of donkey cart races. The donkeys used for these races are usually younger and are believed to be much more expensive than the locally manufactured motorbikes. Lyari wears a festive look whenever donkey cart races are held there. readmore »» 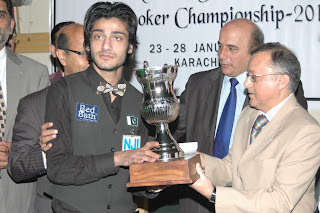 Sialkot’s highly promising teenager, Ahsan Javed, staged a magnificent comeback to defeat Mohammad Ishtiaq of Sindh in the final to win the NJI 8th National Junior (Under-21) Snooker Championship 2010 at the Karachi Club on January 28.

The 19-year-old Ahsan gave a far more impressive account of himself under pressure while turning the tables on Ishtiaq, one of the upcoming youngsters of Karachi, in the battle for the national junior crown.

Ishtiaq, having looked quite confident in his earlier matches, got off to a flying start in the final too but he was unable to sustain his dominance when Ahsan got into his elements in the second half, notching breaks of 32, 39 and 29 in successive frames to seal the fate of the match. He had previously fired a break of 31 in the second frame. Ishtiaq’s highest break in the final was 30.

Tahir Ahmed, Managing Director, New Jubilee Insurance (NJI), was the chief guest in the presentation ceremony soon after the conclusion of the final. Cash awards of Rs 120,000 were disbursed among the top performers of the six-day event.

Ahsan Javed collected a handsome purse of Rs 50,000 with the winner’s trophy while Mohammad Ishtiaq had to be content with a reward of Rs 25,000 with the runner-up trophy.

Mian Mohammad Shiraz and Qamar Zaman Khan, the losing semifinalists, received Rs 10,000 each while the quartet of Rizwan Hashmi, Asjad Iqbal, Yasir Rahman and Ayaz Khan, got Rs 5,000 each for being the losing quarter-finalists.

The tournament witnessed quite a few upsets, reflecting the popularity and growth of the game in the cities of Punjab. Asjad Iqbal and Hamza Akbar, the winner and the runner-up respectively of the last year’s tournament, were knocked out in stunning fashion before the semifinals.

Both Asjad and Hamza, having gained international exposure by representing the country in the World Under-21 Championship last year, were unable to make the cut in the presence of the new crop of talented cueists.

The cueists from Punjab dominated the tournament with five of them making it to the quarter-finals although the highest participation was from the host province of Sindh. The cueists from the NWFP and Balochistan could not make much of an impression this time round. 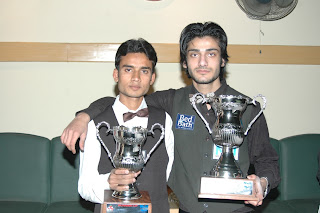 The emergence of cueists like Ahsan Javed, who had made his debut in the national junior circuit a couple of years ago, augurs well for the future of the sport. He showed remarkable qualities and the manner in which he handled in the pressure-cooker situation in the final spoke highly of his skills and temperament.

The performance of Mohammad Ishtiaq was commendable as well. He also has the potential to go places if he is provided the support he deserves.

Now the ball is in the court of the Pakistan Billiards & Snooker Association (PBSA) having the responsibility of arranging the desired facilities and taking care of the immensely talented youngsters. readmore »»