The President of the Karachi Gymkhana for the current year (2009), the soft-spoken Younus Rizwani, takes pride in mentioning his more than a century old club as a hub of sporting activities. 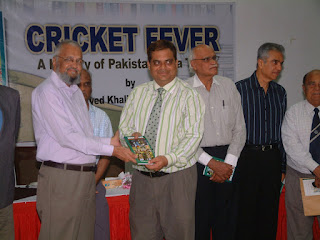 “Karachi Gymkhana offers many other facilities with sports being an area that has made us proud in particular. We are thrilled to be recognized as the leading sports club of the country, having made significant contribution to national sports,” Younus Rizwani remarked in his speech during the launching ceremony of ‘Cricket Fever’ at the Banquet Hall of the Karachi Gymkhana on July 17.

“I am pleased that Karachi Gymkhana today is the venue of the launch of a historic book on Indo-Pak cricket. We have a history of promoting sports. Our club has been engaged in sports promotion for over a century now,” he noted.

“As you all know Karachi Gymkhana has a prominent place in Pakistan's cricket history. It was at our ground where Pakistan overpowered MCC to convince the ruling body of the game that we were worthy of Test status. The scorecard of that memorable match is prominently displayed at our cricket ground even today,” the Karachi Gymkhana President remarked.

“Besides cricket we have been extending support to the promoters of nearly every sport in the national interest. It’s probably for the first time in history that a couple of national ranking snooker tournaments are being hosted by our club during the year. We had played host to the National Snooker Championship 2009 earlier this year and now we are staging the Ranking Cup Snooker Tournament with the collaboration of the Pakistan Billiards & Snooker Association (PBSA),” Younus Rizwani informed the audience.

“We endeavour not only to provide the best possible sporting facilities to our members but we remain committed to play our part proactively in the promotion of national sports,” he added.

“The mood of whole nation changed with the success of our team in England where we won the ICC Twenty20 World Cup. It was after 17 long years when we have become the world champions in cricket again. We look forward to such triumphs much more regularly so that the nation could keep celebrating more often,” he hoped. 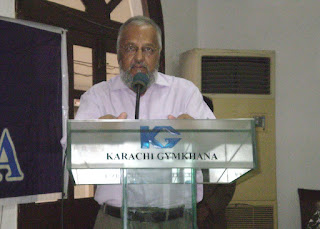 “The cricket matches between Pakistan and India have always been of incredible interest. The people in both countries are crazy about cricket and every cricket match is treated as special. Despite the long breaks, the Indo-Pak series are the ones the cricket followers look forward to. Cricket comes alive whenever these two teams are pitted against each other in any corner of the world. There is indeed something magical in Indo-Pak matches,” Younus Rizwani reckoned.

“Syed Khalid Mahmood’s Cricket Fever is a nice effort. He has thrown light on every series between the two countries during the last 57 years. He has written a chapter on every bilateral tour and they are 16 in all. I congratulate him on writing the book. I am really delighted to note that this actually is his 10th book,” he concluded.