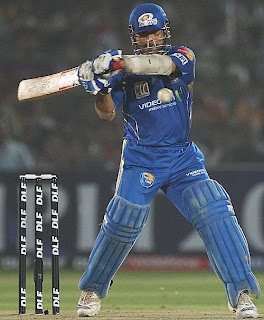 In yet another classic exhibition of controlling the game single handedly, skipper Sachin Tendulkar came out trumps while leading Mumbai Indians to an emphatic 37-run victory over Rajasthan Royals in their return match in the Indian Premier League (IPL) at the Sawai Mansingh Stadium in Jaipur on April 11.

Mumbai Indians became the first team to confirm a place in the semifinals of the IPL-3 with three league matches still in hand. While the other seven contestants would be battling it out grimly in the coming days for the remaining three positions Mumbai would be looking forward to topping the points table without the pressure of qualification.

Tendulkar extended his brilliant form in the season with another magnificent knock that saved Mumbai’s blushes initially. The chips were down for his side when they lost three early wickets and Shane Warne applied pressure for making greater inroads.

Australia’s frontline all-rounder of late, Shane Watson, put Mumbai in disarray by scalping that man Sanath Jayasuriya in his first over and followed up by removing the local duo of Ambati Rayudu and Saurabh Tiwary.

It was Tendulkar who stood firm in the typical style of his and steered the team out of trouble by building two big partnerships, one with South Africa JP Duminy and the one with the West Indian Kieron Pollard.

Left-handed Duminy proved a perfect foil for Tendulkar in the rebuilding phase as they were engaged in risk free game concentrating more on well judged singles to rotate the strike when the field was spread after the Powerplay.

Tendulkar was well set to take on the champion leg-spinner Warne clobbering him for three fours in one over. The much awaited battle between the two greats, as usual, excited the crowd and it was the Indian Grand Master who dominated the wily Australian with a touch of class.

Warne, acclaimed as the greatest spin bowler of all time, was not afraid to flight the ball and Tendulkar was up to the task in heaving him inside-out through extra cover. Warne made the adjustment by dropping one short but Tendulkar was alert enough to make room to cut him through point for yet another boundary.

That has been the beauty of Tendulkar's game all along over the past couple of decades. He would rely on cricketing strokes even in the death overs instead of hitting wildly or attempting to slog. Once again he picked out his spots in the field and runs came thick and fast when he cut loose. He finished it off by smashing two successive sixes off Siddharth Trivedi in the final over yielding no less than 20 runs.

Rajasthan Royals were always expected to be up against it while chasing a target of 175 against a bowling attack having Zaheer Khan, Lasith Malinga and Harbhajan Singh. The only man who could have turned the tables was Yusuf Pathan who had blasted the quickest century of the competition against them earlier but this time he was undone by the medium pace of Pollard and that was the end of the story. 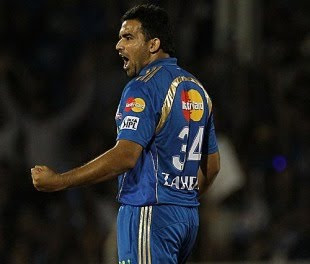 "We needed a solid performance, and I thought 170-plus was a competitive total on this track. The target was to stay there till the end, because we had lost lot of wickets early on. So that added some responsibility on me and JP. I knew it was a matter of a couple of big overs, and they had to come at some stage,” Tendulkar said after the game.

"Full marks to the way our fast bowlers bowled up front. Zaheer, especially; his first spell was terrific. The fielding was very sharp and overall good. There were some very important run-outs and catches; when all these things gel together, it's obviously a special performance,” he added. readmore »»