Nation has a new hero in Naseem Hameed 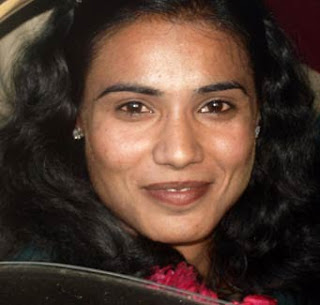 The Pakistan sports in general has been undergoing a lean patch for quite sometime and under the circumstances it’s not surprising to find the nation getting overjoyed with the rare moment of triumph.

She had clocked 11.81 seconds to clinch the gold medal in the race in the 11th South Asian Games to become Pakistan’s first female athlete to win the sprint in the history of the regional competition launched quarter of a century ago.

The 22-year-old Naseem was accorded hero’s welcome upon her return to hometown Karachi and there has been no dull moment for her since then. The life has changed completely for the youngster and she has been elevated to the status of celebrity as quickly as she had covered the distance of those 100 meters.

It’s quite remarkable how life could change within a matter of less than 12 seconds. She was just another athlete before starting the race totally unaware of the fame and fortune to come her way seconds later.

That’s the beauty of life. You can make it big more quickly that you could ever imagine. One can understand her feelings when she was mobbed by hundreds of fans and relatives at the Jinnah Internation Airport in Karachi before the provincial sports minister, Dr Syed Mohammad Ali Shah, drove her to the Governor’s House.

The Sindh Governor Ishraul Ibaad greeted the beaming Naseem with the announcement that she would receive Rupees one million from the President of Pakistan, Asif Ali Zardari, and another half a million rupees from his own office.

“You have made the nation proud. We are very happy and honoured by your tremendous win and hope that you will not sit on this laurel and win more medals at higher level like Olympics,” the Governor complimented.

“I am on cloud nine. I had forgotten the world for six months and trained really very, very hard under my coach Maqsood Ahmed to achieve this. It is a great moment for me to have brought glory to the country in my event since our athletics standards have been poor of late. And I will do my best to compete and win at higher levels like the Commonwealth Games and Olympics,” Naseem Hameed told the media. 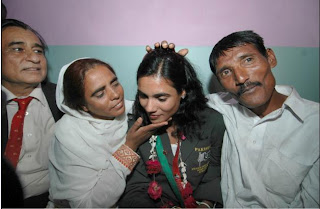 Though, I did expect a welcome on my arrival after extending a good performance in Dhaka but in reality what I saw here was something different and more than my expectations and for this I am very thankful to all, including media,” she added.

“I had left for Dhaka to perform better but what God bestowed on me is more than my aspirations and I am at a loss for words when it comes to express my happiness,” Naseem observed.

“It would be different now altogether. Before this no one knew me and even did not give me any lift but now it would be something different and I would feel proud of it,” she reckoned. readmore »»