Dravid does make the difference 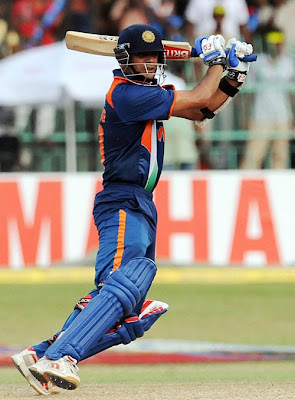 Although it was Sachin Tendulkar who stole the limelight by scoring heaps of runs the contribution of Rahul Dravid in India annexing the recently concluded Compaq Cup in Sri Lanka was no less insignificant.

Already short of both the world-class openers, Virender Sehwag and Gautam Gambhir, India desperately needed depth and resilience in their batting to dominate their rivals. The young guns had been found wanting when exposed to challenging conditions and the selectors had made the right move of going back to the basics.

While Tendulkar’s presence ensured unmatched class on top of the order, the comeback of Dravid provided the much needed strength and character to an otherwise enterprising batting line-up.

When you have the master blasters like Yuvraj Singh, Manhedra Singh Dhoni, Suresh Raina and Yousuf Pathan to follow there is greater need for a solid platform to let them fire to their heart’s content.

This is exactly what happened in Colombo recently. Dravid didn’t score many in the outing against New Zealand but he spent a lot of time at crease to blunt the Black Caps attack. Dhoni and Raina did the rest with their characteristic positive stroke-play. It could have been a different story to relate if India lost early wickets even though the target wasn’t all that big.

India had already cruised into the final, having become the top ranked ODI side in the world in the process, when they came out to take on hosts Sri Lanka in their league match. Set a daunting task, the Indians were in the game until Dravid was at the crease. With his departure the Indian hopes were dashed.

With the makeshift opener Dinesh Karthik having looked out of sorts in the league matches, Dhoni made the bold move of sending Dravid in as the opening partner with Tendulkar. It turned out to be a master stroke as both the seasoned campaigners provided a perfect start that eventually won them the game as well as the trophy.

Dravid is a team man to the core and he is one man who is always more than willing to meet the challenge. He could not have desired a better comeback gift than the Compaq Trophy that was gleefully collected by skipper Dhoni.
Talking of Dhoni let us give him the credit for having laid the red carpet for Dravid, who was returning to the ODI side after quite sometime. “Dravid is the most stable and technically sound. He is a kind of batsman who would look to take his innings till the end. He will support the middle-order and help the flashy players play their game.” Dhoni was quoted as saying before going to toss in the opening game.

"Dravid is the ideal No. 3, especially in such conditions and during the evening when the ball swings and seams, so definitely he we will bat at that position," Dhoni complimented.

Dravid has made the captain proud once more. India would need him at his best in the upcoming Champions Trophy in South Africa where his ability to come good in conditions difficult for batting could again lay the platform for the stroke-makers to make hay in the death overs.