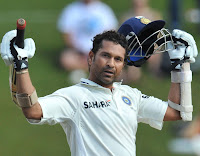 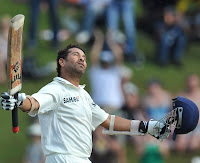 It’s amazing that he made no effort to avoid an innings defeat on the final morning. His tactics of exposing the tail-enders to the genuinely quick bowlers was mind boggling to say the least. He was expected to play both ends which he didn’t for reasons best known to him.
readmore »»

Although it was the six-wicket haul by Ryan Harris that helped Australia in wrapping up the third Test at the WACA Ground in Perth within an hour on the fourth morning it was the sensational performance of Mike Hussey and Mitchell Johnson that had turned it around for the hosts from a precarious position on the first day. 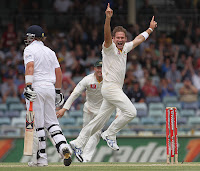 How often can one expect a team to win a Test match by 267 runs after having been reduced to 69 for five in the first innings after being put into bat. The momentum was with England and they were more likely to claim an unassialble 2-0 lead rather than Australia squaring the matters before the last two games.

That’s sometimes the beauty of the game when a couple of individuals rise to the occasion to cover up for the follies of their teammates. Nobody was surprised with yet another magnificent performance from Hussey for he’s regained his devastating form and there’s no stopping him when he gets on top.

But the home supporters must have been pleasantly surprised by the feat of Johnson, who was actually making a comeback in the side after having been dropped for the previous game because of his inconsistency for the past many months. 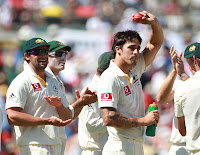 It’s quite incredible how Johnson rose to the occasion. His half-century down the order was instrumental in reviving Australia but more importantly, as it turned out, he carried the confidence to his bowling that gladdened the heart of his skipper.

Johnson struck just when England appeared to be extending their dominance with the bat and it was his terrific spell of left-arm fast bowling that brought his team right back in the game. Australia didn’t surrender the initiative after getting a substantial first innings lead in the context of the game.

With the pitch still good for batting and England having scored heavily in the past couple of games, Australia had to set a big enough target to challenge opponents and it was ensured by yet another mercurial century by Hussey. 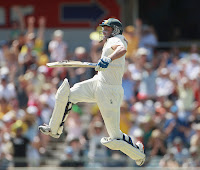 The momentum had shifted by the time England started their chase for 391 on the third evening. Unlike the first two Tests when the Australian bowlers had struggled putting balls in the right areas they were able to exert the pressure that made the difference in the end.

Not many people would have backed England to win the game although South Africa had successfully chased down an even bigger total at this ground just a few years ago. It became obvious very quicky that the pressure had gone to the head of the visiting batsmen and they were unable to handle it.

The top half was blown on the third evening and there was not much hope from the lower order as the innings resumed on the fourth day. Harris produced another probing spell of fast bowling to help his team complete the much needed win within 50minues.

Ponting, even with a broken finger, could not have expected a bigger gift on his 36th birthday and he acknowledged in there.

“There's no better birthday present than that, to bounce back like this. To get 270 on the board on that first day was probably the difference in the end, and then Johnson's spell on day two was probably one of the all-time greatest spells in Ashes history. I'm a bit sore today, I wanted more than anything to be able to go out there and field, but I had to err on the side of caution. Another knock on the finger could have been disastrous. I think I'm a really good chance of playing the Boxing Day Test," Ponting, at last a victorious captain, remarked.
readmore »»